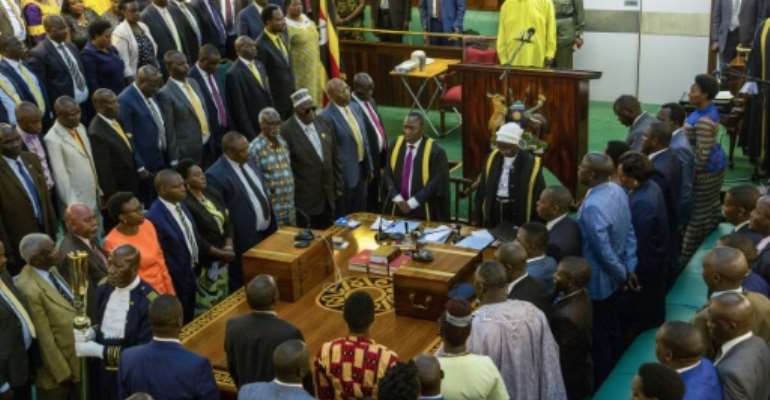 Ugandan lawmakers were divided on the new security measures, with some expressing skepticism and concerns about cost. By Sumy Sadurni (AFP/File)

Ugandan parliamentarians are to receive armoured escorts and snipers to protect them, the president ordered in a letter seen Thursday, after a ruling party lawmaker was shot dead last month.

President Yoweri Museveni ordered that military "sharp-shooters" and a "fleet" of armoured pick-up trucks would be put at the disposal of MPs who, he said in a directive to the finance ministry, were being "singled out" for attacks.

The order follows the shooting of MP Ibrahim Abiriga as well as the unsolved murders of other prominent individuals in recent years, among them government prosecutor Joan Kagezi and police spokesman Andrew Felix Kaweesi.

The new security arrangements -- so far with no cost estimates -- were ordered late last month but only emerged on Thursday, drawing immediate criticism.

"The directive is going to cost the country an arm and a leg for the security of a few privileged individuals," said Julius Mukunda, the executive director of Uganda's Civil Society Budget Advocacy Group (CSBAG).

Mukunda speculated that costs could run into the tens of millions of dollars if all 456 MPs were to be granted the extra security arrangements and described the directive as an "abuse of (the) budget process".

Parliament spokesman Chris Obore said, "It's not for every MP, but those who face threats," without elaborating on who, or how many, they were.

"I have never asked for such security but I saw... that a pick-up is going to be acquired with sharp shooters... to shoot who?" MP Thomas Tayebwa asked during a session in parliament.

"Those who need extra security should register themselves before procurement of the cars is done to avoid wastage, as it is a waste for some of us not interested," he added.

Shadow defence minister Muwanga Kivumbi said Museveni's order was proof that "he has failed on security".