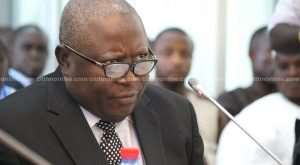 Special Prosecutor, Martin Amidu, is investigating acting National Chairman of the governing New Patriotic Party (NPP), Freddie Blay, on how he funded the purchase of 275 buses for all 275 constituencies of the party.

Mr. Blay has been widely criticized for taking steps to fulfill his promise of purchasing the cars, after he took delivery of the first batch of 100 mini buses at the Port on Wednesday, barely three days to the party's national delegate's congress in Koforidua, where he's contesting to become the substantive national chairman.

Mr. Blay, who facilitated the purchase of the mini buses, is reported to have made a down payment of 3 million dollars, which constitutes 30% of the total cost of 11.4 million dollars for the 275 cars.

Mr. Blay's spokesperson has explained that the buses are not for free, and that they are to help the constituencies to manage their activities by themselves, and generate revenue by using them for commercial purposes, to pay for them over a two-year period.

But Mr. Freddie Blay's close contender in the NPP chairmanship race, Stephen Ntim , has accused him of seeking to buy votes with the gesture, whereas others have questioned the source of the money, alleging possible corruption.

A source at the Office of the Special Prosecutor told Citi News that Mr. Amidu will go ahead with the investigations whether or not Mr. Blay wins this Saturday's election.

The source said Mr. Martin Amidu is of the view that, Mr. Blay is a public officer as a Board Chairman of the Ghana National Petroleum Corporation (GNPC), and also as a national officer of the governing party with influence, he falls under the Criminal offenses Act (1960) Act 29, and must therefore be questioned on his source of funding.

Mr. Stephen Ntim has advised the delegates of the NPP not to be swayed by the gifts and offers from Freddie Blay.

“If you are really in love with your party or any organization that you belong to, you don't wait till a situation arises where you need favour from the people before you say I'm giving you a bus. If you do that, it amounts to vote-buying. Why is it that during the 2016 campaign he didn't bring 275 pickups, not even buses, but wait for the time when you say 'vote for me and get these buses'. That amounts to vote-buying,” he said.

“Please accept anything that is offered to you, but do not allow those considerations to influence your decision to vote for Ntim,” he advised NPP delegates.

While touting some of his achievements, Mr. Ntim said 16 years ago, he single-handedly donated 14 vehicles to the party. Back then he identified a need and took care of it without making any promises to anyone or expecting anything in return. He said every regional secretariat of the party received a vehicle from him, while four constituencies received one vehicle each.

“It is important to note that in those days, this modest gesture was unprecedented in the party,” he said.

He said he wants delegates to consider him and vote for him due to his contribution to the party over the years.