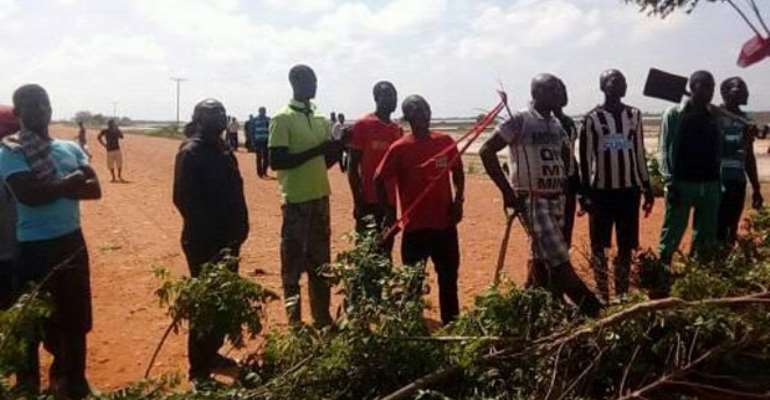 Angry workers behind the barricade to the company

SOME AGGRIEVED workers of the Songor Salt Project at Sege in the Ada West District of the Greater Accra Region have poured out their anger on management and blocked access to the premises of the company.

According to the agitated workers, their decision stemmed from the failure of their managers to pay their salaries and outstanding allowances for three months.

They claimed that the management of Songor Salt Project has failed to pay monies owed them since April 2018 and several attempts to get their monies paid have not yielded any positive result hence their decision to express their displeasure.

It took the intervention of the Sege District Police Headquarters to calm down the situation and remove the barricade erected by the irate miners who took the place hostage for several hours.

Spokesperson of the workers, John Tetteh Okutu, explained that management owes about 50 workers of the company.

According to him, failure on the part of management to pay them their salaries is putting undue pressure on them from their families and dependants, thereby making life uncomfortable for them.

He said, “Management owes us a whopping amount ranging from GH¢40 to about GH¢1,200 per individual”.

However, management of the state-owned facility later engaged the aggrieved workers in a meeting where it was agreed that they would be paid a sum of GH¢40,000 by Friday, 8 June, 2018, while both parties meet again next Tuesday to determine the mode of payment for the remaining amount.

Mr. Degbe Kwei, the Human Resource Manager (HRM) of the company, assured workers of payment of their salaries, saying that their monies would be paid in two installments with the first trench coming this week and the next payment by the end of next month.

He, however, refuted claims that management has sacked some workers for demanding their monies, saying it is two security personnel who are currently on interdiction for violating a portion of the Collective Bargaining Agreement.

The HRM noted that the committee had been instituted to investigate the matter and it would come out with its report for the next line of action.

According to them until recently, during the dry season, the lagoon's water would crystallize into salt.

These persons pump brine into the dikes, wait for salt to crystallize and then bag it for sale. The methodology is said to be employed by individuals described as powerful, rich and strong who often recruit women and children as labourers in exchange for paltry payments.

Now, a women's group for salt winners in Ada-Songhor has given a reminder about the need to address the 'selfish and unsustainable' salt winning method that is akin to 'Galamsey' in the metal mining sector in order to return to equitable communal access to the Songhor, allowing everyone to make a living independently.

You Lauded Mahama For Free SHS In 2015, So Why Feigning Igno...
6 minutes ago