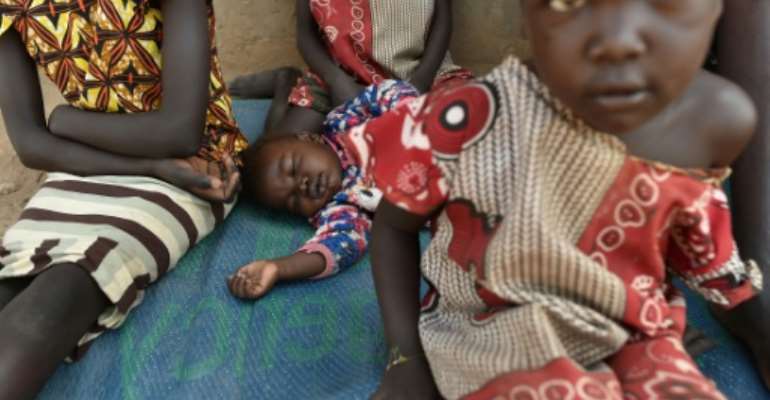 The war in South Sudan has triggered a worsening refugee crisis. By TONY KARUMBA (AFP)

A humanitarian crisis in conflict-torn South Sudan is reaching alarming proportions after four and a half years of fighting, Jan Egeland of the Norwegian Refugee Council (NRC) warned on Thursday.

"I've never before seen, heard, experienced so many people being so food-insecure in so many places in South Sudan," he told a press conference in Nairobi.

"What is different this year is that the acute food insecurity has spread to more parts of the country," such as southern Equatoria, he said.

In February, UN agencies warned that 48 percent of South Sudan's population was experiencing extreme hunger and seven million would need aid in 2018.

In 2017 some 100,000 people were affected by a famine -- meaning people started dying due to lack of food. It was declared over in June.

However the protracted conflict has devastated agriculture, displaced millions and sent food prices soaring, putting 11 counties at risk of man-made famine this year.

Egeland highlighted increasing fatigue with the conflict while donors are overstretched with crises elsewhere, and the difficulty for aid workers inside the country.

"South Sudan gets decreasing attention and has increasing needs. We are ready to help but we need more resources, we need access, security and we need a ceasefire," he said.

Since war broke out in December 2013, 101 aid workers have been killed in South Sudan, said Egeland.

South Sudan, the world's youngest nation, was engulfed by civil war in 2013 after President Salva Kiir accused his rival and former deputy Riek Machar of plotting a coup against him.

Violence -- initially between ethnic Dinka supporters of Kiir and ethnic Nuer supporters of Machar -- has since spread to other parts of the country, engulfing other ethnic groups.

The last ceasefire, signed in December, was broken within hours while the latest round of peace talks in the Ethiopian capital Addis Ababa have stalled.

Sudanese President Omar al-Bashir this week offered to host a meeting between Kiir and Machar. Kiir welcomed the opportunity while Machar's camp said they would be happy to hold such a meeting, but had not been informed about it.

Observers say that with the government winning militarily and the opposition fractured more than ever before, there is little incentive for Kiir to make concessions to his rivals.