Halitosis, How To Manage Bad Breath 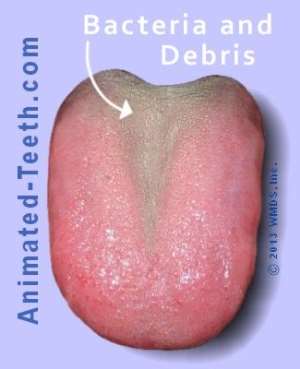 HALITOSIS. Bad Breath
The mouth provides the warm and humid environment, suitable for the growth of many different types of bacteria species.

Bad breath is caused by smelly waste products, produced by bacteria in the mouth (87%) and elsewhere.(1)

Anaerobic bacteria, thrive in areas devoid of oxygen, such as deep grooves, the surface of the posterior half of the tongue, areas in between the teeth and in spaces formed as a result of age related gum recession.

The posterior half of the tongue surface, offer optimal habitat for odor producing bacteria which commonly, thrive in the tongue coatings (film of debris on the posterior tongue). The film of debris appears white in color, but may be yellow, grey, brown and even black in color.

These 3 chemicals, known as volatile sulfur compounds (VSCs) are responsible for majority of bad breath from the mouth.

Other smelly compounds produced, depend on the age of individuals, and the types of bacteria living in their mouths. Other compounds are produced in low undetectable quantities.

. Skatole [C9H9N] and indole[C8H7N] are phenyl compounds that smell like feces. They are produced from the amino acid, Tryptophan

. The Diamines: Putrescin[NH2(CH2)4NH2] and Cadaverine[NH2(CH2)5NH2] are from lysine and ornithine and smell like urine and rotten meat.

These substances are found in the breath of all humans, at low undetectable levels. When their levels get elevated, other humans detect them.

Most of the bacteria that cause bad breath, are the same bacteria involved in gum and tooth infections.

Less than 10% of bad breath originate from areas outside of the mouth. The areas include

Lack of sleep and Sinus inflammation and infections

Lack of sleep and emotional Stress lower the body's immunity, promote the production of inflammatory mediators, that lead to sinus inflammation and sinus infections, slow salivary flow, and increase VSCs oral levels. Most college students encounter this problem, in the periods preceding examinations

Morning Breath Odor
This is physiological form of bad breath. It is due to decreased saliva flow, during sleep coupled with increased anaerobic bacterial activity.

This problem disappears as soon as one rinses their mouths and brush their teeth.

Salivary flow, dry mouth and bad breath
Normal saliva has antimicrobial activity. Saliva "cleans" the mouth of bacteria. Decrease in saliva production and flow, reduces the ability of the mouth in getting rid of odor-producing bacteria.

. increased volume of plaque on teeth and tongues,
. decreased antimicrobial activity of saliva.
. Predominantly gram negative, bacteria rather than the usual gram positive.

SYMPTOMS OF HALITOSIS
Most individuals with bad breath may be unaware they have it. Some of the symptoms include:

. Dry mouth
. Coated tongues
. sour/bad taste in the mouth
. Bad smelling breath.
. Red/swollen/bleeding/tender gums
. Pain on chewing/sensitive teeth
DIAGNOSIS OF HALITOSIS
Organoleptic scoring (smelling the odor of the person) is the gold standard. Rosenberg and McCulloch give a score of 0 to 5, where:

. NASAL ODOR TEST. While the subject is breathing through the nose (mouth closed), a score is given to the exhaled air

Self-testing for halitosis.
. SALIVA ODOR TEST. Lick your wrist. Wait for 10seconds to allow the saliva to dry. Now smell the wrist. A score is given to this sample. That is the way your mouth smell.

. INTERDENTAL 'FLOSS' TEST: Floss your teeth with a dental tape. Smell the tape after flossing. Score the odor on the tape. (That is the way you smell)

Precautions: to ensure test reliability,
. Avoid cleaning or rinsing the teeth at least, 12 hours before testing.

. Avoid garlic, onions and spicy foods for 24 hours before testing

. Use floss and interdental cleaner to remove food particles between teeth, once a day

. Rinse with antibacterial mouthwash twice a day
. Dentures should be removed at bedtime, and cleaned thoroughly, before being placed in the mouth in the morning.

Treatment is aimed at decreasing the number of VSC producing bacteria. This may be achieved in several ways.

TONGUE CLEANING
The posterior half of the tongue surface harbors most of the culprit bacteria. Using regular toothbrush, tongue scraper (use may even use a teaspoon) or tongue cleaners, to clean those areas, go a long way in reducing VSC levels and the severity of halitosis.

To avoid vomiting, pull out the tongue as much as possible when brushing/cleaning/scraping.

WHY IS TONGUE CLEANING, SO IMPORTANT?
A 1998 study by Delanghe on the oral causes of halitosis, determined that 51% of cases were due to tongue coating, 32% due to gum disease and 17% from a combination of both. (1). This means that in 2/3 of cases, thorough tongue cleaning may cure or improve bad breath

Don't forget to Replace toothbrushes, every two to three months

WHY IS FLOSSING NECESSARY?
Bad breath causing bacteria live in dental plaque that builds up on and around teeth and also, around the gum line. Removing the plaques dislodge these bacteria. Flossing removes smelly bacteria that live below and above the gum line. Both flossing and brushing is needed. Effective flossing must be an integral part of oral hygiene.

. Hydrogen peroxide 3% solution has been found to reduce VSC to very low levels for most part of the day.

Zinc salts in mouthwash and gums reduce VSC levels by 45%

They include:
. Chewing gums
. Sprays.
. Mint tablets
. Rinsing products
WHEN TO SEE A PHYSICIAN
. Sores in the mouth
. Pain on chewing
. Pain on swallowing.
. Persistent dry mouth
. Fever
EXTRA-ORAL CUASES OF HALITOSIS
Less than 10% of bad breath cases originate from sources outside the mouth. Some are from the nose, throat and lungs. Others could be a sign of underlying systemic disease. It may require the services of dentists, internists, ENT specialists and other specialists to help manage such problems.