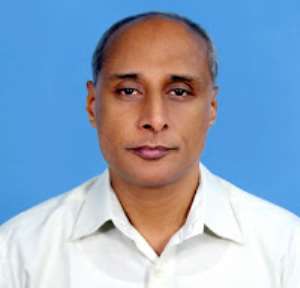 A 55 year old male, suffering from Type 2 diabetes for the last 12 years, presented with pain, swelling and dark necrotic patches over his right leg. He gave a history of minor trauma to the leg about two weeks before admission to this hospital (Aster Medcity, Kochi), for which he was being treated earlier in another hospital. He developed fever with chills, increasing infection of the right leg, and was then transferred to our institute for onward management.

He was not ‘offloading’ the infected lower limb, resulting in spreading of the infection, with onset of blebs and redness all over the right leg. His glycemic control was not good, and he had not been very regular with his diabetes medications, which included Insulin. Physical examination of the patient revealed that the he was drowsy and febrile, with features of dehydration. He had extensive necrotizing fasciitis of the right leg. The skin and ulcers had a dusky discolouration; the lower limb was oedematous with foul smelling purulent discharge from multiple sites of the leg. A peripheral angiogram showed extensive arterial blocks of his right lower limb, as a result of his long standing diabetes. Due to this, and because the patient was in impending sepsis, peripheral angioplasty or a peripheral bypass surgery was not possible.

A wound debridement surgery to remove the infected tissues was not advisable as it had a very high probability of failure due to the poor blood supply to the leg, that could lead to gangrene of the operated area, followed by multi organ dysfunction and eventual death. The only logical surgical management was to carry out a life saving below or above knee amputation, which the patient refused point blank. He said, “I would rather die, than undergo such a mutilating surgery”. He was, however, ready for a debridement of the infected tissues. With the patient’s written consent, we decided to apply conventional management, along with ‘mind-energy technique’. And we managed to save him, as well as his leg.

Mind-energy techniques, in conjunction with conventional medical strategies, can dramatically improve treatment outcomes of most physical and mental illnesses. Mind is energy, and when focused correctly, and with great intensity, on the diseased organ or area, like a wound in the leg, can help cure the organ ailment and heal the wound. ‘Visualization’ is a powerful mechanism to focus the mind-energy to the site of the ailment and heal oneself. Care givers can help in imparting this training to the person in need and guiding her/him till complete healing has occurred.

SAVING THE LIFE AND LEG OF THE PATIENT
In the above mentioned case, the patient’s training in intensely focusing his mind on the site of the infected wound was started even before surgery. He was told to visualize in a relaxed manner, that the blocks in the arteries of his leg were slowly dissolving, the blood flow to the area was improving, collateral circulation formation was happening, and the blood perfusion to the leg was increasing.

As per conventional management, the patient was taken up for a debridement of the necrotic area of the right leg, under anaesthesia. All the infected tissues were excised, tissue sent for bacterial culture and antibiotic sensitivity. On the operating table, the blood flow of the wound was found to be satisfactory, since the patient had already started focusing his ‘mind- energy’ on the right leg to improve circulation. After surgery, daily wound dressings were carried out, strict offloading of the operated leg, culture specific intravenous antibiotics were started, tight blood sugar control and other required supportive therapy commenced.

Along with this, the patient was also taught the basics of wound healing physiology. He was told to concentrate his mind on the operated wound, and to visualize the physiological processes of increasing the circulation and wound healing.

WOUND POST SPLIT SKIN GRAFT
This mind concentration and visualization, he did very intently. By three weeks after surgery, healthy and viable tissues were formed. Usually, even in the best of cases, this process takes four to six weeks. Thus a split skin graft could be done earlier than expected and the wound healed much faster. He was ambulant, and back to his job as an accountant, within six weeks of surgery. Normally one would take 8 to 12 weeks to return to work and normal activity. Thus, defying all odds and medical predictions, the patient had healed his leg wound and prevented a major amputation.

I have been practicing this treatment modality since past few years, with excellent results.This method can be applied to any organ system of the body, and most diseases of the body and mind can be cured by using this method in conjunction with management by the specific allopathic consultant doctor— required investigations and medical/ surgical management as deemed necessary. Care givers have thus been able to help heal patients with acute and chronic problems, some of them declared to be incurable. It is of course very important that the patient should have the willingness and mental ability to understand and comply with the management plan to affect a cure. Care givers can only explain the specific processes to the patient and relatives, and guide the patient along the path to a complete recovery.

This and other case studies highlight the important role of patients' beliefs and emotional responses to their illness in influencing their health-care management. Human physiology informs us that our body is a miracle of nature and has an extraordinary talent to heal itself. Our body has an energy field. Sometimes due to mental stress and worry, we experience negative energy, which blocks the body’s natural healing ability. Very often a build-up of negative emotions results in sickness. Stress lowers the immune system of the body. Thus the body is not protected against a disease. Once the stressful situation is over, it takes time for the body to switch back to its immune system.

Meditation works largely by influencing stress response pathways. People who meditate regularly have lower cortisol levels, and studies have shown that they have changes in their amygdala, a brain area involved in fear and the response to threat. Physical exercise too is very important. Many studies have shown the positive effects of physical activity on the physical and mental health of individuals. We must not undermine the important role played by the patients' beliefs and emotional responses to their illness, in influencing their health-care management.

Author’s Note: Necrotising fasciitis is a deadly infective disease affecting the soft tissues of usually immunocompromised individuals, like those with diabetes, malnutrition, HIV infection. The lesion, may start as a minor wound over the leg or foot and rapidly progress to involve the other parts of the lower limb. This condition has poor prognosis and a high mortality rate if not treated aggressively. In a patient with diabetes, necrotizing fasciitis is a limb and life threatening disease, and the bacterial infection can easily spread through the blood, to the patient’s other organs (like the heart, brain, kidneys) suppressing their functions and leading to a serious multi organ dysfunction.

(Dr Ajit Kumar Varma is Senior Consultant, Department of Podiatric Surgery, Aster Medcity Institute, Kochi, India, and is a columnist with CNS (Citizen News Service). He can be contacted at: [email protected])