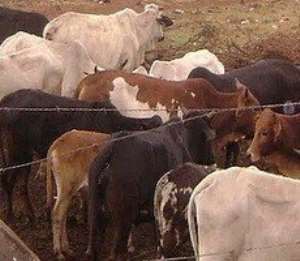 Keseve cattle ranch located in North Tongu Constituency in the Volta region which houses over 30,000 cattle is begging for a milk factory.

Currently, milk produced at the ranch go bad because of lack of proper storage and processing facilities. According to the caretaker of Camp ranch in Keseve, Zakari Yussif, cattle business in the Keseve is very lucrative.

“It is a very good business to rear animals. We have clients who buy cattle from Juapong, Koforidua and Tulaku”, he said.

In Keseve, caretakers are serious about vaccinating the animals, to keep the animals healthy, free from disease outbreaks and ultimately to reap from their investment.

Food and Agriculture Organisation estimates that the expanding market for cow milk will be worth $400 million by 2019 but Ghana is yet to tap into this business potential.

It is estimated that since 2014 Ghana spends over $200 million on meat and meat products. This trend could, however, change if the government increases investments into cattle production.

Challenges of Keseve cattle farmers
When the raining season begins, the cattle get fresh grass to graze and enough water to drink, however carting the cattle for sale is difficult because of the poor nature of the road.

Again, the young herdsmen, are not paid with cash, they milk the cows and sell them for profit. Sadly, during the rainy season, the herdsmen are unable to sell the milk also because of the poor nature of the road.

Zakari expressed worry about the current situation and wants a milk company established in the North Tongu constituency.

Business potential
The Cattle in Camp ranch in Keseve produces 75 litres of milk in a day and a litre goes for GHC 1. Also, a healthy cattle goes for GHC 1200. According to the Zakari Yusif, they are available to work with any company who can come and invest in the North Tongu.

“There are no companies that have approached us for partnership. We can produce any amount of milk for any companies who are willing to come here so that the youth of North Tongu can get jobs to do.

The government could partner the ranch and implement a milk factory under the one district one factory programme to provide jobs for the youth of North Tongu.