Sampa; My Town, My Tears 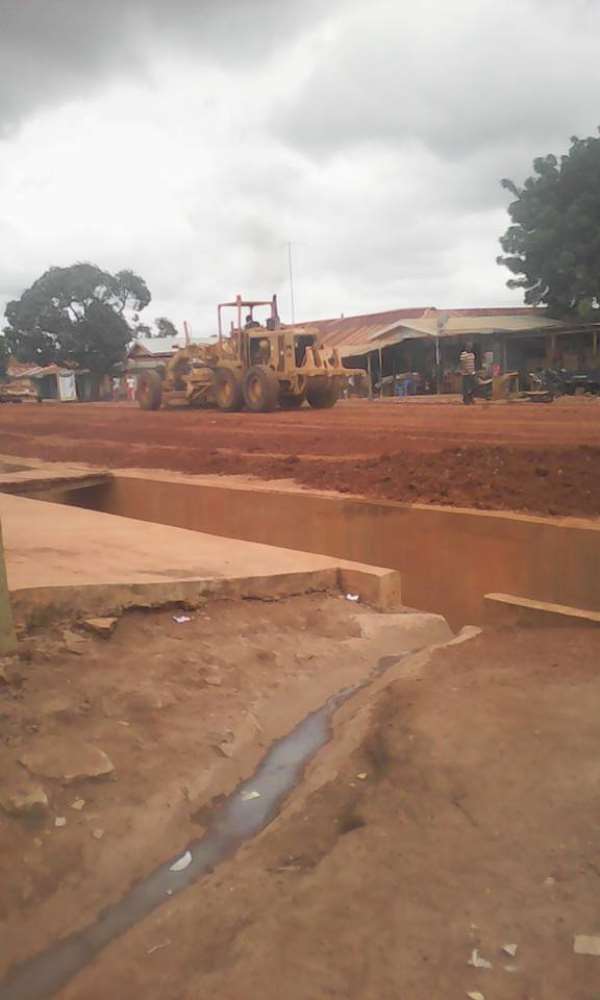 The name Sampa is certainly not alien to the people of this country. The name sounds familiar to you right? The name of the town has echoed across the length and breadth of Ghana for obvious reasons. Sampa is the capital of the Jaman North District in the Brong Ahafo Region of Ghana. The town was noted for being a slave market in the then Gold Coast. It is interesting to know that Sampa is a major gateway to the country.

It is also the biggest border town in Ghana with a population of over 26,000. Sampa and its environs has made giant strides in the area of agriculture. The natives are into the production of foodstuffs like yam, tomatoes, okro, garden eggs and the like. Cashew is the major cash crop produced by the people of Sampa and its environs.

Sampa, having made a name for herself as a major gateway to the country, an ordinary Ghanaian wouldn’t be wrong to think that Sampa is an alluring and adorable city with glittering streets, good market and good roads. It is rather unfortunate and very pathetic that this good description of Sampa by foreigners only happens in the dreams of the indigenes of Sampa. It is just an optical illusion.

For over two decades and still counting, the issue of good roads in Sampa has always been a nightmare and never a reality. This description about the good state of Sampa in the minds of foreigners belongs to fairyland. Sampa and its neighbouring villages hosts one of the most horrific and shitty road networks in the country. Very pathetic, I guess.

The lucrative nature of cashew attracts businessmen from far and near, not forgetting the Indians who troop into the town only for them to be slapped right in the face by very hostile potholes on the roads of Sampa. Over the years, cashew farming has boomed in Sampa and its environs. It is fascinating and refreshing to know that cashew in 2013 generated about $170m in the form of foreign exchange earnings into the economy of Ghana. This therefore made the cash crop to rise to fame in Ghana by making it the second-largest contributor to non-traditional export crops in Ghana. Cashew exports generated a whopping sum of $244.5 million revenue in Ghana in 2016. A chunk of these cashew nuts come from the heart and belly of Sampa and its environs. Considering the massive contribution of Sampa and its environs to the development of Ghana, the people of Sampa still bemoan the bad nature of their roads.

No doubt, the government definitely accrues money by taxing the companies dealing in the business of cashew in Sampa. In my candid opinion, the District’s contribution to the nation’s revenue is far way ahead of many districts financially in the country. It is heart-breaking to note that the town regarded as a “town of money” and a district capital is 'rewarded' with bad roads which are not easily traversed by vehicles.

Admittedly, it is very comforting and exhilarating when traveling from Wenchi to Debibi. But traveling from Debibi to Sampa begins the woes of the traveller. Believe me, traveling from Debibi to Sampa is not all fun and games. The road is not tarred and it is 'decorated' with potholes which in truth deserve to be called manholes. One is compelled to cover the nose and be gasping for breath throughout the journey when plying this road. You are being greeted by red-dust painted houses and dusty iron sheets immediately you enter the town.

It is a taboo to travel with white shirt in Sampa because one will definitely be enveloped in the clouds of immeasurable dust. No amount of words could convince a colleague that you have not been dug from a hill of red clay after you have plied the Sampa to Jamera Road. Need I talk of the roads of Kogyei, Kabile, Kokoa and Adadiem? Trust me, the condition of the roads in these towns is very nauseating, sickening and appalling. In fact, the roads are nothing good to write home about.

You just can’t walk freely in the town especially when it rains slightly. All hell is broken loose anytime it rains. All that is seen is a very thick mud. The natives of the town are compelled by these external forces to literally lock themselves in the comfort of their rooms and refuse to come out. They fear that they may be swimming uncomfortably in the pool of waters which are being stored in the “manholes” on the roads. Most vehicles and taxis get bogged down in the heavy mud and need to be pushed by the few generous people around.

Plying these roads in Sampa has had devastating consequences on both passengers and drivers. The unmotorable state of the roads of Sampa and its environs deter most drivers from regularly plying the road. These roads are not only dusty but are also described as death traps because of the existence of “manholes” which qualify to be fish ponds in the very middle of the roads. For the drivers who are bent on eking out a living from driving, they would have to face the cold terms of changing their cars every blessed year in order to stay in active business. Enquire from anybody from Sampa and its environs the number of 2015-2017 registered buses and taxis that are still operating in 2018. Most of these vehicles have completely broken down because these vehicles couldn’t stand the bad road network in Sampa.

That state of affair culminated in the heavy demonstration organized by the Concerned Youth of Sampa during the closing embers of the NDC government in 2016. It appears that political office holders especially MP's and DCE's struggle for projects of this nature when we're closing in on elections but may they be reminded that the people of Sampa are 'wise' now. The duration from now to elections is not short a distance.

It is a disgrace for a gateway to the country to be in that terrible state. It is really an eyesore. Sampa and its adjoining communities are no longer at ease. As a matter of urgency, the roads of Sampa and its environs need a major facelift. I am not a prophet of doom but I have no qualm that If the government officials in the district refuse to sit up now, massive demonstrations are doing a serious 'warm-up' which will erupt with the ferocity of a volcanic eruption. We call on the government to come to our aid with immediate effect.

Sampa community is our home and pride…..
THE WRITER, EFFAH ELVIS IS A CONCERNED CITIZEN OF THE COMMUNITY OF SAMPA 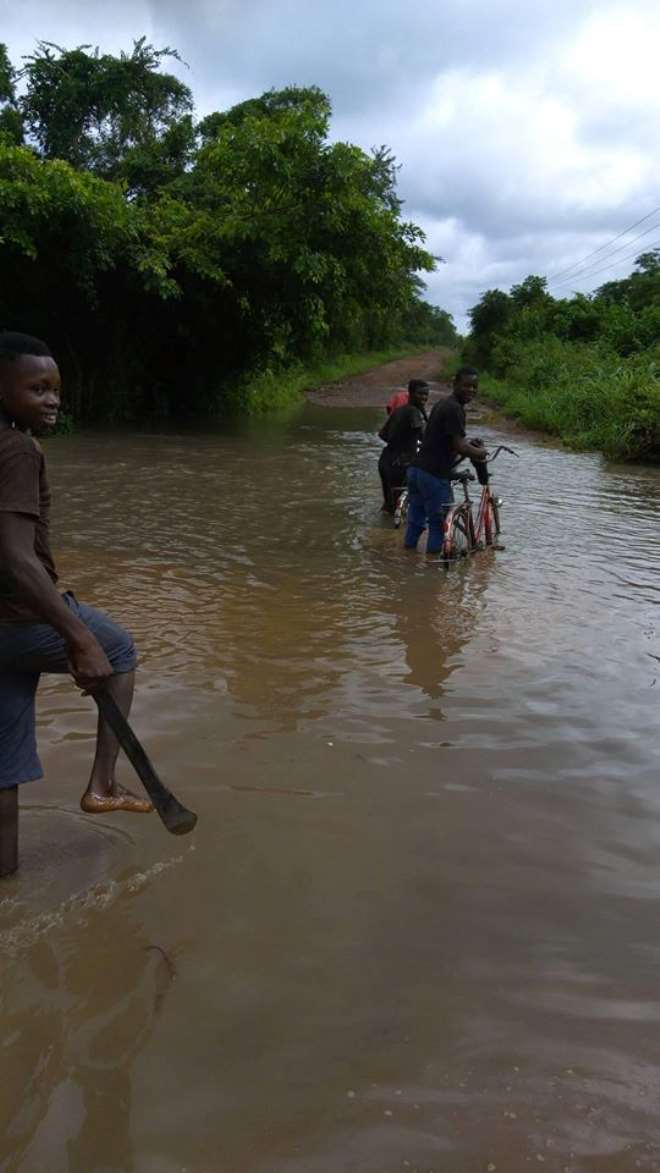 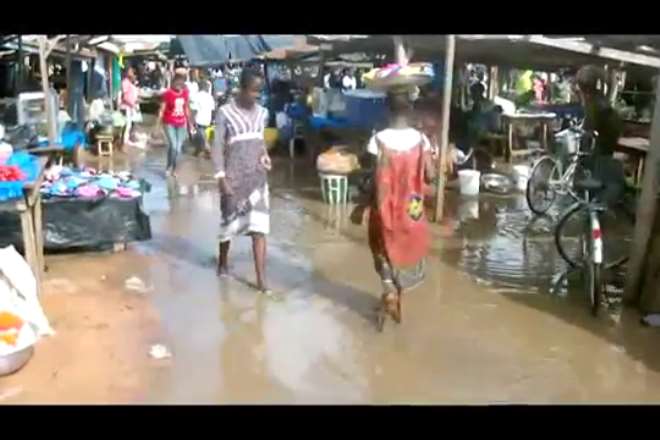