Why Abronye DC Was Attacked...The Inside Story 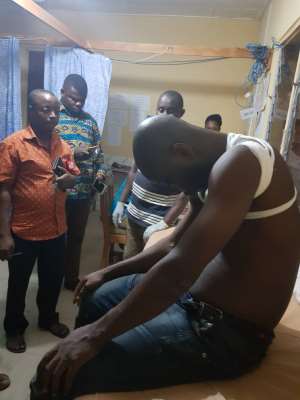 The outspoken politician who is vying for a National Executive Position in the NPP was in the Atebubu-Amantin constituency to interact with party members.

According to some eyewitnesses, midway through the meeting at the residence of the DCE, some young men led by one Jafa entered the place and demanded why he has been attacking the Brong Ahafo Regional Minister, Kwaku Asomah-Cheremeh.

But before Abronye could say jack, the thugs burning with rage slapped him and attacked him with anything they could lay their hands.

Surprised by the unfortunate spectacle unfolding before their eyes, the executives present could only watch in awe as the young men visited their venom on the helpless Abronye.

Fearing for his life, Abronye took to his heels in an attempt to flee from his assailants but they chased him out and continued to hit him with a metal rod.

Satisfied with their actions, they then left him to his fate.

Why was Abronye attacked?
Kwame Baffoe for some time now has been on the neck of the Brong Ahafo Regional Minister, KwakuAsomah-Cheremeh.

He has among other things accused the Regional Minister of using his office to amass wealth through extortion and other fraudulent means and has petitioned the President for his immediate removal.

His incessant attacks on the Minister has created some enemies for him in the constituency as one of the attackers, Jafa is alleged to had some time last year threatened him on phone.

So they decided to use his visit to the constituency to put the fear of God in him and warn him to stay off the Regional Minister.

How is Abronye?
Abronye was rushed to the St Luke Hospital in Kasei for treatment but our checks reveal he has been referred to the KomfoAnokye Hospital under police escort for further medical checks.

He sustained serious injuries including a fractured arm.

Who is Jafa?
Even though the identities of all the members of the gang have not been unraveled, one person called Jafa has being fingered in the attack.

In fact, Jafa and Mr. Asomah-Cheremeh have a lawyer-client relationship as the former had in the past represented the latter in court anytime he had brushes with the law.

Any Arrest so far?
So far, no arrest has been made yet but the District Police Commander, Edward Konyer has promised to bring the culprits to book.