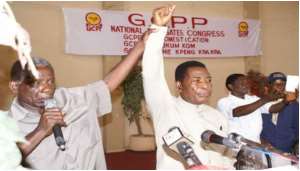 A former publisher and labour unionist, Mr Lartey's name became a household one following his 2004 mantra of ‘domestication’, the political philosophy of growing Ghana from Ghana, instead of depending on foreign aid and investments.

His political career started in 1969 when he contested the Gomoa East Constituency seat on the ticket of the National Alliance of Liberals (NAL) in the parliamentary election of that year.

In 1972, he was appointed a special adviser to General Ignatius Kutu Acheampong’s National Redemption Council (NRC) government and in 1978 he represented Gomoa-Ewutu-Effutu at the Constituent Assembly to write the Third Republican Constitution.

He was a founder member of the People's National Party (PNP) in 1979 and aspiring presidential candidate of the National Independence Party (NIP) in 1992, losing to Mr Kwabena Darko.

With signs of old age and its attendant ill health, Mr Lartey returned to Ghana on November 29, 2009 after a six-month visit to the United States of America (USA) where he had received medical treatment, but he passed away on Monday, December 28, 2009.

Our dear father may your soul rest in perfect peace.