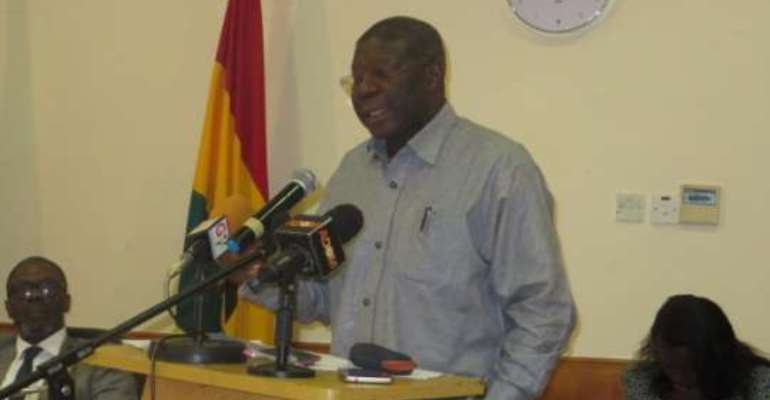 "We need to be able to imagine and find out what animates a terrorist, what goes on in the mind of a terrorist, such that he wants to blow himself up and take other people with him.

"While seeking to tackle what we believe are the outward manifestation, the bombings and the rest, it is also important to try and understand the causes," Mr Quartey said at the end of a training course on Preventing and Countering Violent Extremism at the Kofi Annan International Peacekeeping Training Centre (KAIPTC) in Accra.

The two-week course was attended by 44 participants draw from the security forces, civil and public services and civil society organisations across Africa.

It was organised by the KAIPTC in collaboration with the African Centre for the Study and Research on Terrorism (ACRST).

Mr Quartey said: "Sometimes we are tempted to say that terrorism is just violence without reason, I think that thinking underestimates the problem which faces us".

He noted that in a world facing growing cousins between the poor and the rich, terrorism, global pandemics such as Ebola, as well as challenges around global political stability, accountability and security, the time had never been more urgent to have a discussion about facilitating a global discourse on how to tackle these challenges.

He said some African countries were growing, whereas others were facing fragility and persistent poverty; declaring that "our continent is highly exposed to environmental risk and climate change but our vision remains an Africa, integrated, literate and numerate, a united Africa, that can contribute its own input to the global problem solving efforts and not to become itself a problem".

He lauded the KAPITC for running the course dubbed "Countering and Preventing Violent Terrorism"; adding that it was an extremely important course to concentrate on.

"Our continued engagement and our collaborative efforts towards understanding terrorism, violent extremism and to address and counter it is therefore very critical," he said.

"Everyday calls on us to have a closer look and to seek to deepen our understanding on how this phenomenon evolved, the better to allow us to adjust how to counter it and address its cause, and the recruitment of our young people into such militant terror groups," Mr Quartey added.

"We must seek to understand the roots of this phenomenon, what motivates them, what animates them and none of us is immune from extreme terrorism."

"The collapse of the state of authority in Libya, created and brought in its wake other problems we didn't think about.

We know that Colonel Gaddafi was not exactly a saint..... but at least Libya was stable," he noted.

"You would find work, you could find peace. I visited Libya several times. We had meetings there. Libya was able to absorb and prevent our hungry youth desperate with crossing into the Mediterranean in the conditions that we see today," he said.

"So when the UN Security Council in a bid to counter what they thought was a threat from Colonel Gaddafi they passed a resolution and the no fly zone was created; that was basically a declaration of war. Many of our African representatives on the Security Council slightly voted with the majority. It was only I believe Brazil, which protested.

"The challenge facing us now as Africans, as a continent is to be able change the narrative on the continent; the continent with the brightest sunshine somehow is known as the dark continent, you wonder how?

"The continent where the large numbers of the youth are now seeking in droves to leave, that posses a very fundamental problem! What is it? That they are running away from? Bad governance, lack of democracy, hunger and poverty? But these are challenges that can be addressed if you look at the root causes."

Mr Quartey said the AU in its agenda 2063, talks about an Africa which was integrated as their vision, united, democratic, at peace with itself and at peace with the rest of the world, able to contribute its quota.

"We have mechanism modern scientific agriculture operating within an Africa where our boarders have now become bridges of corporation," he said.

He cited that Ghana and CÃ´te d'Ivoire, which accounted for 70 per cent of world cocoa production, could together determine its price on the international market.

Lieutenant Colonel Larry Gbevlo Lartey, AU Chairperson's Special Representative for Countering Terrorism Cooperation/Director of the ACRST, said the course was important because it related to the prevention of violent extremism.

He said good governance was critical at the community, local, national regional and international levels for the prevention of violent extremism.

At the event, a memorandum of understanding (MoU) was signed by the AU and the KAIPTC.

Mr Quartey initialed for the AU, while Air Vice Marshal (AVM) Griffith S. Evans, the Commandant of the KAIPTC, signed for the Centre.

AVM Evans explained to the Ghana News Agency that the MOU was intended to enable the Centre work with the AU to do more training.

In October, 2016, the KAIPTC and the ACRST, a Centre of Excellence of the African Union Commission signed a MoU to combat terrorism in Africa.