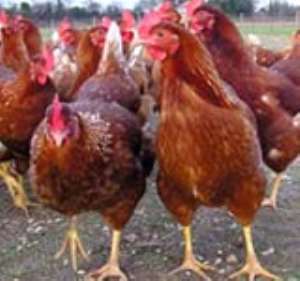 Labourer shocked audience at Accra Circuit Court when he disclosed that he has been mixing Indian hemp to his poultry feed.

Sia Mohammed Ayambire said the poultry feed laced with Indian hemp made the birds grow at a faster rate and they also become weighty thereby increasing their prices.

According to him due the weight of the birds he sells the male birds at a cost of GH¢ 80 cedis while the females were sold at 70 cedis.

He said he was ready to supply the audience who are interested in the purchase of his birds.

The 29-year-old labourer said this in court where he has been charged for the use of a narcotic drug.

Ayambire pleaded not guilty and the court presided over by Mrs Abena Oppong Adjin Doku admitted him to bail in sum of GH¢ 7,000 with one surety.

He is to reappear on January 15.
Prosecuting Chief Inspector Kwabena Adu told the court that the complainants are Police personnel stationed at Regional SWAT Unit, Accra whiles the accused resides at Kweiman, Accra.

On December 7, this year, the Police went to invite a suspect in connection with a trespassing case.

Chief Inspector Adu said accused person was arrested and claimed that he adds same to his poultry feed.