Celebrations and calls for unity as ANC greets new leader 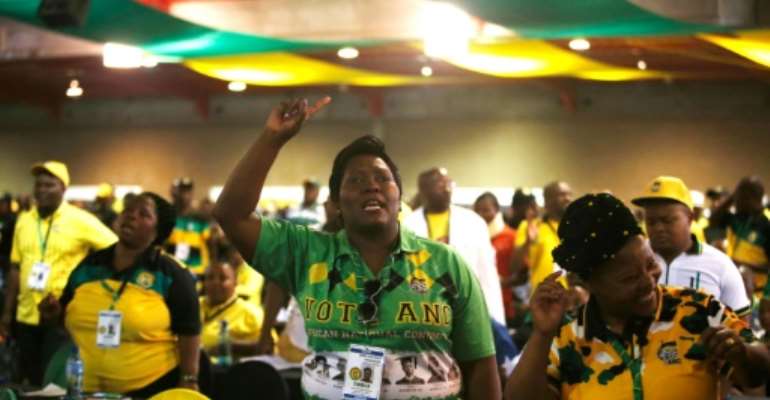 Delegates sing during the plenary session of the African National Congress. By WIKUS DE WET (AFP)

In the moments before Cyril Ramaphosa's triumph in the leadership race for South Africa's ruling ANC, he and President Jacob Zuma snapped selfies together.

Even before the announcement was made, Ramaphosa's backers -- who go under the banner "CR17" -- had already begun to cheer and chant wildly.

A vast image of the African National Congress' new leader was unfurled as long applause and loud singing greeted news at the party conference venue outside Johannesburg.

"We are very happy about the outcome. I will support the new president," he said.

Outside the hall, ANC supporters blocked a road leading to the conference centre, dancing and singing party songs. They were bathed by the lights of police cars surrounding the gathering.

Elite police officers were briefly deployed in the front of the stage as the results of the delayed voting were being announced.

But as newly-elected senior ANC officials were announced, each shook Ramaphosa's hand, sending a message of unity after a divisive campaign that some said could permanently split the party.

Later Dlamini-Zuma tapped the table with her hand in time to celebration music.

The election of David Mabuza as deputy party president was seen as a significant victory for Dlamini-Zuma loyalists, despite her defeat.

'This is my president'

"Both camps have won. Cyril promised he will fight corruption. He is a good man. We want Zuma to finish his mandate," said Menzi Nzuza.

Zikalala Snuki, the president of the party's veterans' league, described the result as "democracy".

In Soweto township, 10 minutes drive from the conference venue, street celebrations broke out.

On Vilakazi street, where Nelson Mandela and archbishop Desmond Tutu once lived, bars and restaurants were full of ANC supporters.

Businesswoman Bontle Motau proudly brandished a photo of herself with Ramaphosa on her cellphone as ANC struggle-era songs played at deafening volume.

"This is my president -- he has wisdom," said Motau who grew up on the street that is now a nighttime draw for the new black middle-class.

"The last time I celebrated like this was when Mandela was released from prison," she said as she danced with a crowd dressed in green, yellow and black -- the ANC's signature colours.

In the Sakhumzi restaurant a crowd of men watched the news live streamed on a phone propped up on a straw hat as they drank lager.

"I think he's been a great candidate but I'm sure they (Dlamini Zuma supporters) are very disappointed -- but I don't foresee trouble," said waiter Mike Sibanda.