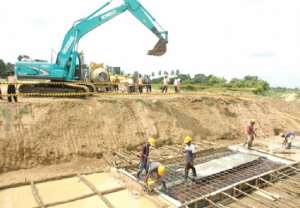 Some aged people in the Wa East District of the Upper West Region have expressed their eagerness to see the 'one-village-one-dam' policy kickoff so they can take advantage of it to better their lot.

According to them, if the 'one-village-one-dam' policy comes into effect, they could take advantage of the proximity to their communities and venture into gardening to better their living conditions.

The aged made this known during a Town Hall Meeting organised by the Wa East District Assembly in collaboration with the Ministry of Information on Thursday.

They lauded the 'Planting for Food and Jobs' programme and said it was a conduit to increase food production, but cautioned that activities of Fulani herdsmen in the District posed threat to farmers' efforts and ought to be checked.

They also expressed concern about pricing of farm produce and appealed to the government to impress upon the Buffer Stock Company to attach prices to various farm produce the company would be buying as it was practiced in the case of cocoa, so that famers could benefit from stable pricing.

Also, a police post built at Kundugu in the District four years ago without police personnel being posted to man the place was of concern to the people.

They appealed to the District Assembly to take up the matter and ensure that police personnel were posted there to provide security for lives and property.

Mr Jotie Moses, the Wa East District Chief Executive (DCE), said Town Hall Meeting seeks to give a platform for assembly officials to share vital information on the government's programmes and policies with the citizens and also take their feedback to government for better planning.

On education, the DCE said the performance of students in the 2017 Basic Education Certificate Examination (BECE) improved tremendously as compared to 2016.

He said despite the investment, the government and the Assembly were making to expand classroom infrastructure in the District, some of the girls could not further their education beyond the basic level due to poverty, and described the situation as regrettable.

'This situation has resulted in many of such girls being forced into early marriages with a total number of 39 reported cases in respect of the first half of 2017,' he said.

The DCE said government, bearing in mind the incidence of child marriages, which was fuelled by extreme poverty, had rolled out the Free Senior High School (SHS) policy which sought to remove cost barriers to SHS education, expand school infrastructure, improve quality and equity of secondary school education.

Mr. Moses briefed the people on what the government was doing in the area of health, Infrastructure for Poverty Eradication Programme, One-District-One-Factory, Road Infrastructure, Water for all Initiative, National Sanitation Campaign, the National Entrepreneurship and Innovation Plan and prospects for 2018.