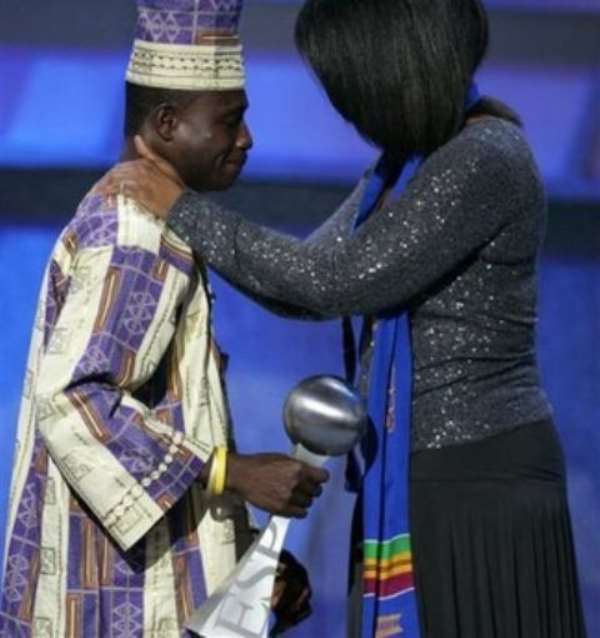 During Wednesday's ESPY presentation at the Kodak Theatre in Hollywood, the incredible stories of Emmanuel Ofosu Yeboah and Jim MacLaren opened the eyes of the audience, and will do so again with TV viewers when the ceremony is televised Sunday on ESPN at 6 p.m. If it took a special trip by Oprah Winfrey to present the Arthur Ashe Courage Award to Yeboah and MacLaren to make anyone take notice of something special here, so be it.

Yeboah was born with a deformed right leg in Ghana, a country that considered the disabled to be cursed and would often hide, or kill, them off. His father abandoned him after his mother died, which would normally lead an orphan in his situation to become a street beggar. Instead, he found a job shining shoes for $2 a day. Wanting to prove more, he heard about the Challenged Athletes Foundation thousands of miles away in Del Mar and through an e-mail asked if it could donate a bicycle. His goal was to ride it on one leg through his country to raise money and change stereotypes of the disabled.

Yeboah eventually met up with MacLaren, a former football player from Yale who worked with the CAF. MacLaren became a disabled athlete when he lost his left leg below the knee in a motorcycle accident at age 22 but learned to race in triathlons on one leg and a prosthesis. Then, in 1993, he was hit by a van during a competition and left paralyzed, confined to a wheelchair.

In the three years and hundreds of miles he has rode since he received the donated bike, Yeboah has met African kings and United Nations leaders and slowly changed the way two million disabled people are treated in Ghana -- with MacLaren serving as one of his biggest supporters.

Yeboah and MacLaren were reunited on stage Wednesday with Winfrey. Following an eight-minute video on their lives, the standing ovation was a sincere, tear-filled experience.

"What brought us together 10 years ago kind of makes it like Homer's Odyssey," MacLaren, who does motivational speaking and has a Web site ( www.jimmaclaren.com to help other disabled athletes, said to reporters after the presentation. "You look at my life when I was a so-called 'stud athlete,' but 10 years later all the gifts have gone. I feel like I have wings right now."

The inspiration: Yeboah's story is the stuff for movies, as an 80-minute documentary narrated by Winfrey called "Emmanuel's Gift" has generated tremendous buzz during film festivals and fund-raising screenings across the country. The film is scheduled be distributed in theaters nationwide in September.

Considering that twin sisters Lisa Lax and Nancy Stern are responsible for producing, directing and writing "Emanuel's Gift," the quality of work done on it is a given.

Lax has won more than a dozen Emmy Awards as a producer and director for NBC Sports, supervising almost 150 profile features shown during the NBC's Olympics coverage since the Atlanta Games in 1996. Stern is a successful TV producer as well, becoming the first woman to produce Tour de France coverage before moving over to do ABC daytime TV shows.

Southern California viewers may already be familiar with Emmanuel's story after KABC-Channel 7 sports reporter Curt Sandoval did a piece on it last February, when the documentary debuted at the Santa Barbara International Film Festival.

Sandoval has close ties with the Challenged Athletes Foundation, having first met MacLaren about 12 years ago when he did a story on him. That inspired Sandoval to become a triathlete and raise money for CAF.

Sandoval had heard about Yeboah's story a year ago but wasn't sure if he could tell it in a typical minute-and-a-half time frame for on a local sportscast, but when Yeboah came out for the film's debut, Sandoval figured out a way to do it, riding a bike with Yeboah for the piece. It aired as a three-minute segment during an expanded "Sports Zone" Sunday show following an NBA playoff telecast.

"I've had hundreds of people, even months later, say they saw that piece, and it's nothing I did, it's the power of Emmanuel," Sandoval said. "You just start telling his story and you get out of the way. He is so humble, but yet so powerful when you meet him."

Another reality check: Mark Fields, the Carolina Panthers linebacker whose fight against Hodgkin's lymphoma appeared to be over a year ago as he recovered and made the Pro Bowl, received the ESPY for Best Comeback on Wednesday.

It was a fitting tribute since the ESPY Awards also raise money for the V Foundation for Cancer Research, established during the first awards ceremony 13 years ago when former North Carolina State basketball coach Jim Valvano made his memorable speech about not giving up during his last days battling cancer. The V Foundation has raised more than $45 million and has awarded more than 220 cancer research grants since '93, and an auction this week sponsored by ESPN Radio raised more than $200,000.

Unfortunately, Fields' cancer has come back, and he admitted that he was to start chemotherapy treatments Thursday at the Mayo Clinic in Phoenix. His intentions are to play again in the NFL.

"It's devastating, but all you can do is keep pounding," said Fields, who has drawn on inspiration from cyclist Lance Armstrong and former position coach Sam Mills, who died from cancer last season.