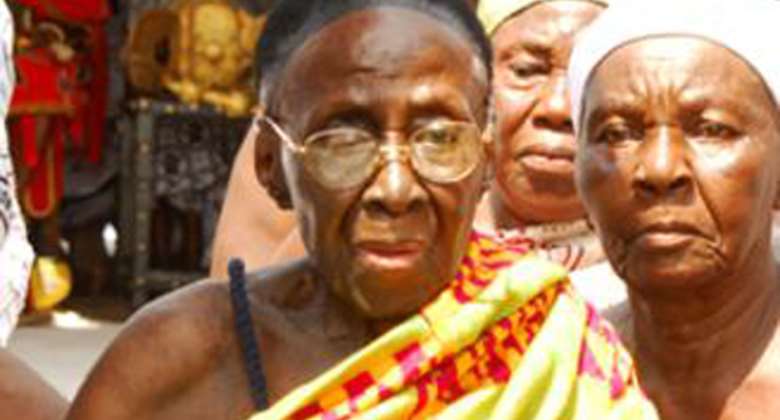 Dreaded fetish priests would display at the forecourt of the Manhyia Palace in Kumasi, the seat of the Asantehene, Otumfuo Osei Tutu II today as part of the final funeral rites of the late Asantehema.

The fetish priests, who have spiritual powers, would storm the sacred place to openly display to the public.

The performance of the priests would officially commence the two-week funeral rites of the late Asantehemaa, Nana Afia Kobi Serwaa Ampem II, who died at age 111.

The late Asantehema was buried at the Royal Mausoleum at Breman, near Kumasi some months ago.

Scores of fetish priests from various parts of Ghana are also expected to travel to the Manhyia Palace on Friday morning to start the grand funeral rites.

The historic event, which could be likened to a spiritual contest, would commence at the forecourt of the palace in the morning.

The Asantehene Otumfuo Osei Tutu II, the spiritual leader of Asanteman, would witness the performance of the priests.

According to sources at the palace, some of the fetish priests would use their powers to conjure money and other precious items publicly.

They said the performance of the fetish priests would also help to bring good omen to ensure peace prior to the two-week funeral rites.

Hotels Full
Thousands of people are expected to visit Kumasi in the next two weeks to attend the funeral of the Asantehema at the Manhyia Palace.

DAILY GUIDE has gathered that virtually all the major hotels in Kumasi have been booked.

The influx of a large number of people into the city would also boost the sales of businesspeople.

Navrongo: Navro-Pio appeals to Akufo-Addo to complete abando...
48 minutes ago

US economist Steve Hanke urges Ghana to set up currency boar...
2 hours ago