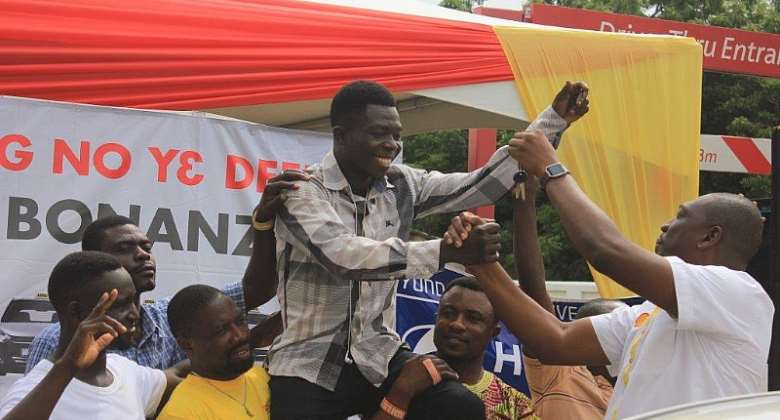 Accra – 28th November, 2017: A truck driver, Dawu Kwame and a civil engineer, Nicholas Selorm are the winners of brand new Hyundai Grand i10 taxis after the third and fourth mini draws took place in the ongoing Shell Filling No Y3 Deep Taxi Bonanza.

Jeffery Kwaku Manso, a trotro driver and James Arkoful, a taxi driver both won a one year and six months’ free fuel respectively in the third draw whilst Abdul Adam, an electrical engineer won six months’ free fuel in the fourth draw. In addition, over 500 people won amazing prizes including free shopping vouchers and Shell Helix lubricants in both draws.

“I never believed it was me. I initially thought it was one of those jokes from friends. So when I had the call, I didn’t take it seriously. However I came to the venue on the set date for the presentation. Upon approaching, I saw the car and a lot of people gathered before it dawned on me that truly, I had won a car. I am very grateful to Vivo Energy and the Shell promotion because, I will be counted as a car owner in my family”, said Dawu Kwame during the presentation.

The Retail Manager of Vivo Energy Ghana, Mr. Kwame Ackah, who represented the Managing Director, encouraged all customers to continue to buy at least GHS60 worth of fuel to stand a chance of winning any of the remaining two taxis in the promotion.

The ‘Shell Filling No Y3 Deep Taxi Bonanza’ is being run in partnership with the National Lotteries Authority (NLA) on the Caritas platform and Hyundai World by Hyundai Motors & Investments Ghana Limited.