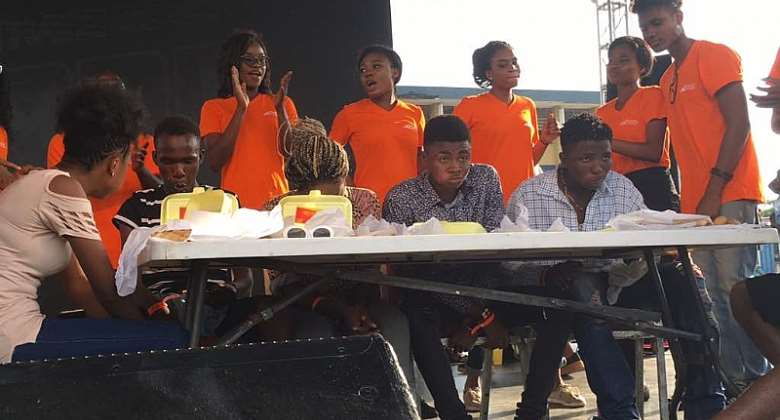 In what appears to be the first time an e-commerce company in Africa will organise a music concert to usher in the Black Friday festival, Jumia Group Nigeria (all the companies within the ecosystem) surpassed its customers’ expectations this year by organising a music concert in honour of the Black Friday festival which started on the 13th of November and is expected to run through 13th of December.

The highlight of the concert which held last weekend was the eating competition organised by Nigeria’s No.1 food ordering platform, Jumia Food . While there were many side attractions such as the adrenalin pumping performances by the likes of Wande Coal, Falz, Skales, Niniola, Sound Sultan, Mayorkun and others, the eating competition brought frenzy to the crowd, and left them spellbound.

A total of 6 young teenagers (3 males and 3 females) volunteered to participate in what seemed easy at first glance, but only 2 of them could finish the task effortlessly. Imagine the rigour and torture of having to consume within 10 minutes several plates of foods/snacks without using your hands! It was similar to a tug of war but this time around, using your mouth to pick every piece of food on the plates - and oh, without drinking water. The anticipation from the crowd was much; the cheer was deafening and each contestant had a pool of supporters drumming up support for the win. The grand prize was a N10,000 food voucher.

Speaking at the event on the company’s participation at the concert, Olamide Bada, Managing Director of Jumia Food said the platform provided a good opportunity to interact with its teeming customers.

“For us, it’s about interacting with our customers and showing them how to use our platform to order for food. As a company, we have created this platform to ease the stress of ordering food from your favourite restaurants within minutes,” Bada said.

I'll hand over power to the next elected president on 7th Ja...
46 minutes ago

[VIDEO] Ghana is hot; our girlfriends are moving to Togo – J...
55 minutes ago