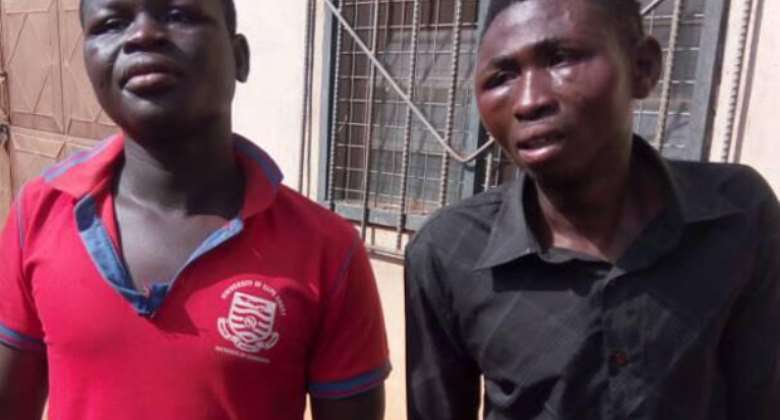 Dojie Kwame, 28 and Akwasi Obio, 21 – both students of Tamale Technical University who were arrested by the Tamale police over the murder of Rev. Ocran Ebenezer, head of End Time Bible Believers' Fellowship at Kumbiyili, near Malshegu in Tamale – will be arraigned before court today, November 14, 2017.

They have been charged with conspiracy to commit murder, murder and theft.

Meanwhile, members of the church have indicated that they have faith in the police in pursuing the murder case to its logical conclusion.

Rev. Ocran Ebenezer, 64, and native of Takoradi, was allegedly hit with an object and killed instantly by the suspects.

His mortal remains have since been deposited at the Tamale Teaching Hospital for autopsy and preservation.

The suspects reportedly took away a blue Toyota Highlander with registration No.GN 1763-14 and some undisclosed amounts of money.

The Northern Regional Police Public Relations Officer, ASP Yussif Mohammed Tanko, who confirmed the arrest to DAILY GUIDE, said a complaint was lodged by Ben Asamoah, a pastor of the church, when he detected the crime.

According to him, the District Criminal Investigation Department (CID) of the Police Service, had information of a Toyota Highlander registered GN 1763-14, being brought to the informant – a sprayer at Tamale Industrial Area – to be re-sprayed and sold and undercover detectives were dispatched to the place, but the culprit had left the scene, leaving the vehicle behind to be sold.

He indicated that intelligence led to the arrest of Dojie Kwame, who is identified as the one offering the car for sale. He is said to be a co-tenant of the deceased and cousin to Akwasi Obio – who confessed the crime.

The Toyota Highlander is currently in possession of the police.