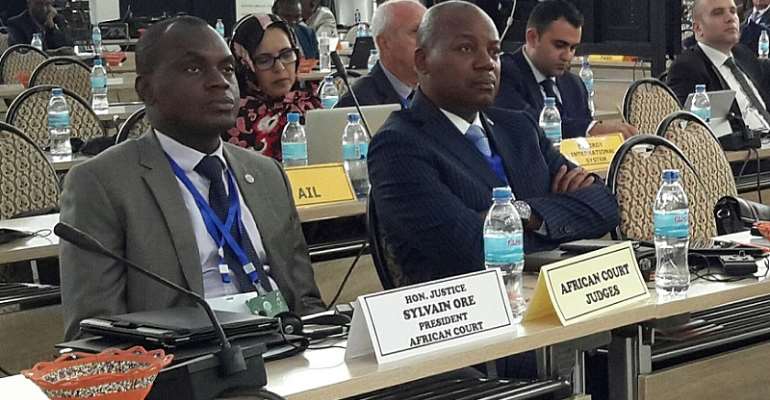 Arusha (Tanzania), Nov. 11, CDA Consult – Participants at the Third African Judicial Dialogue has commended the African Court on Human and Peoples’ Rights for the promotion of justice on the Continent and demonstration its independence, integrity and fairness over the past ten years.

The participants which included Chief Justices, Presidents of Supreme and Constitutional Courts from the 55 African Union (AU) Member States, as well as regional and international judicial bodies and other relevant stakeholders lauded the African Court for progressively creating legal platform for the vulnerable to seek redress.

Joining the team of Judges who praised the Continental Court, Mr. Justice Ferdinand L. K. Wambali, Principal Judge of the Judiciary of Tanzania noted: “I wish to thank the African Court which is the premier judicial continental body.

“Over the past ten years of its existence it has demonstrated its independence, integrity and fairness.

“It is noted that there is no doubt the African Court has delivered some landmark judgments on many issues which you will have opportunity to deliberate on together with assessing their efficacy in furthering administration of justice on the continent”.

He noted that: “We may disagree with some of the judgments of the African Court, which is normal, but what is important is to take note of the fact that the Court has already brought about renewed hope and optimism within the African justice and human rights system”.

Justice Wambali said the African Court has positions itself firmly as a veritable tool in the quest for regional integration, peace, unity, good governance, respect for human rights and development.

“I am fully convinced that you will have ample time to deliberate deeply on the contribution of the Court in this regard and come to a conclusion on how the court has assisted in improving the efficiency of justice in Africa,” he noted.

Meanwhile, Ms Karin Pluberg, a representative of German Development Cooperation (GIZ) recounted that the first Judicial Dialogue back in 2013 which has set the ground for a hopefully longstanding tradition of a bi-annual judicial conference, and establishes a constant dialogue among legal practitioners.

At the second Judicial Dialogue in 2015, the need to reinforce links between National, Regional and International Courts was pointed out, as well as the importance for a common understanding of the human rights protection and promotion system on the continent, she noted.

She said the different layers of legal systems need to work hand in hand and in order to guarantee a sound protection of the citizens.

In our modern times, digital solutions are inevitable and the institutional structure should make use of these new technologies in order not to lose the connection to, especially, the young generation.

“The development of strategies to incorporate technology in justice delivery based on a needs assessment of all African Union Member States is one of the priorities to tackle.

“On his note, I would like to mention that the African Governance Architecture (AGA) at the African Union level has developed policies and guidelines for a transparent communication for all governance institutions, including those with a Human Rights protection mandate that could serve as a basis for discussion,” she said.

Third African Judicial Dialogue, organised by the African Court on Human and Peoples’ Rights under the auspices of the African Union (AU).

The Dialogue is being attended by about 150 delegates from AU Member States- including Chief Justices, Presidents of Supreme and Constitutional Courts from the 55 AU Member States, as well as regional and international judicial bodies and other relevant stakeholders.

The biennial meeting is on the general theme: ‘’Improving Judicial Efficiency in Africa’’ and is a follow up to the first edition held in November 2013 in Arusha, Tanzania, and second in November 2015, also in Arusha.

The overall objective of the Dialogue is to explore ways of enhancing judicial efficiency in Africa.

It also serve as platform for Africa’s top judiciary officials to exchange experiences on the on-going continental judicial reforms, trends on human rights jurisprudence, continuing judicial education and management of judicial institutions on the continent.

The African Judicial Dialogue is organized in collaboration with the World Bank, the German Cooperation (GiZ) and the European Union (EU).