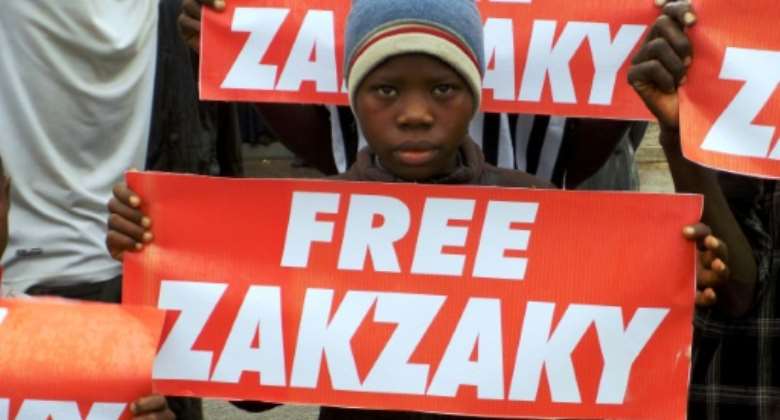 Shiite Muslims have protested in the streets to press for Ibrahim Zakzaky's release. By AMINU ABUBAKAR (AFP/File)

Nigeria's government was on Thursday urged to order the release of a pro-Iranian Shiite Muslim group leader, who has been in custody for nearly two years since clashes with soldiers.

Ibrahim Zakzaky, who heads the Islamic Movement of Nigeria, and his wife should be freed "on health grounds", lawyer Femi Falana said in a letter to President Muhammadu Buhari.

The cleric lost the sight in his left eye during two days of unrest in the northern city of Zaria in December 2015 in which soldiers allegedly killed more than 300 IMN members.

Now he risks losing the sight in his right eye "sequel to the brutal treatment meted out to him by the armed soldiers", Falana wrote.

Zakzaky has long been at loggerheads with Nigeria's secular authorities because of his repeated call for an Iranian-style Islamic revolution
Zakzaky's wife, Zainab, was said to be in a "far worse" state, according to the lawyer, who said he visited the couple in secret police detention in Abuja a few days ago.

"For reasons best known to the State Security Service, some of the bullets lodged in her body during the brutal attack of December 14, 2015 have not been extracted," he wrote.

"In the circumstances, she has been subjected to excruciating pain and agony on a daily basis," he added, warning her life was in danger unless she received urgent medical attention.

Nigeria's government has previously ignored a court order to release the couple. Hundreds of IMN were arrested during the military crackdown in Zaria.

Zakzaky has long been at loggerheads with Nigeria's secular authorities because of his repeated call for an Iranian-style Islamic revolution in Nigeria.

Northern Nigeria is predominantly Sunni Muslim.
On Sunday, at least three people were killed in the northern city of Kano when police shot at an IMN procession marking the Shiite day of mourning, Ashura.

The march, which begins in Kano and heads to Zaria, has been a regular flashpoint. Last year, the IMN claimed police had shot and killed at least 30 without provocation.

Office of Special Prosecutor still without a board
39 minutes ago

Annoh-Dompreh hints at reviewing 1.75% E-levy when Parliamen...
39 minutes ago