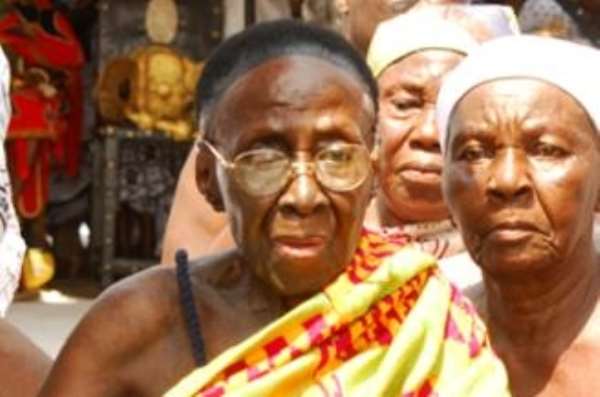 The Manhyia Palace has set Friday 1st, to Monday 11th of December 2017, as dates for the performance of the final funeral rites of the late Asantehemaa Afia Kobi Ampem II.

Burial rites have already been held for the Queen mother who passed away in 2016 at age 109.

Briefing the press on the final funeral rites, the Chairman of the funeral committee, Nsuase Opoku Agyeman, Otumfuo’s Akyeamhene, said the funeral is open the public, but urged strict adherence to the arrangements.

Nsuase Opoku Agyeman advised residents and traders in the Central Business District of Kumasi to close their shops n Monday and Tuesday, explaining that “there will be firing of musketry in the streets, the executioners will also be around to display, so as Nananom parade from Adum to Manhyia, we will advice that all shops be closed, no trotros or taxis should be seen working.”

He further announced that, “no one should be seen in the evening on Saturday. It should be observed just like the Thursday during the burial rites, because that evening, Nananom will take the Abusuakuruwa to Breman.”

In connection with the funeral, a ban has been placed on all funerals from the Friday 1st December to Monday 11th December.

The Funeral arrangements are as follows:
Friday 1st December: Performance by traditional Priests and Priestess from 6am to 6pm at the Boagyawe in the Manhyia Palace.

Sunday 3rd December: Kuntunkuni day, Otumfuo will sit in state from 11am to 6pm at Dwabrem at the Manhyia Palace.

Wake keeping continues from 6pm till day break of Monday at Manhyia and all other Palaces across the Asante Kingdom.

Fasting begins.
Monday 4th December: Traditional wailing from dawn to 6am by the Queen mother and other women in the palace. They are expected to parade from Manhyia to Adum and back. There will be firing of musketry.

This event is purely private.
From 7am to 12pm, Nananom of the Kumasi Traditional Area will parade from their various areas to Manhyia in their smocks.

At 1pm, Otumfuo will parade from Pampaso, through Kejetia, Dr. Mensah, Krofrom to Manhyia Bonmu in his Batakari Kese.

He will sit in state to receive sympathizers and donations from 3pm to 6pm at Dwabrem, in the Manhyia Palace.

Tuesday 5th December: Firing of Musketry by Paramount Chiefs of the Asante Kingdom from 8am to 1pm at the Manhyia Bonmu.

Otumfuo will sit in state to receive sympathizers and donations from 9am to 6pm at Dwabrem at the Manhyia Palace.

Wednesday 6th December: Performance of customary rites. Otumfuo will sit in state to receive sympathizers and donations from 11am to 6pm at Dwabrem in the Manhyia Palace.

His wife is expected to console him with the traditional Gold Necklace, Awisiado.

Otumfuo will sit in state to receive sympathizers and donations from 11am to 6pm at Dwabrem in the Manhyia Palace.

Government Officials are on this day expected to sympathize with the King.

Wives of the Princes of the Golden Stool will present customary burial articles, Adosoa and Futuo from 10am to 1pm at Dwabrem in the Manhyia Palace.

Friday 8th December: The fast which began on Sunday will end on this day.

Otumfuo will distribute sheep, foodstuffs and firewood to mourners who have been fasting in the morning.

Consecration rites of the stool in memory of Nana Afia Kobi Serwaa Ampem II will be held in the evening at Werempe.

Saturday, 9th December: Exhibition of the various customary burial articles presented by the wives of Princes of the Golden Stool from 8am to 12pm at the Asantehemaa’s Palace.

There will be purification rites for the cleansing of the royals of the Golden Stool. This will be characterized by the shaving of hair and paring of nails into the Abusua kuruwa from 6am to 12pm, in front of the Asantehemaa’s Palace.

Otumfuo will sit in state from 2pm to 6pm to welcome the consecrated stool of Nana Afia Kobi Serwaa Ampem II from Werempe at Bogyawe.

In the night, Asantehene and Asantehemaa will send the Abusua Kuruwa to Breman.

Dress for this event is Adinkra Fufuo or black and white cloth.

Monday 11th December: Otumfuo will sit in state to bid farewell to Nananom and express his appreciation and gratitude to sympathizers from 10am to 3pm at Dwabrem in the Manhyia Palace.

On Monday and Tuesday, Residents in Kumasi are advised to stay indoors and not come around the Central Business District.

On Saturday evening, no one must be seen outside from 12pm to 5am.