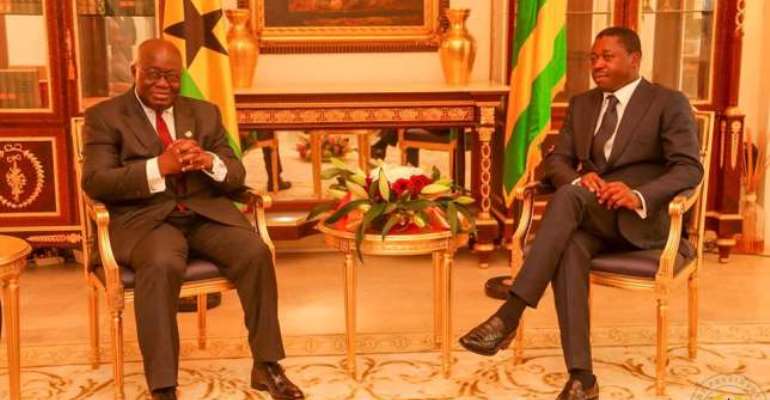 President Akufo-Addo has stated that his administration has been working behind closed-doors in an attempt to bring the current political crisis in Togo to a closure.

According to the President, his government is in talks with Togolese officials to address the crisis in that country.

Togo in recent times has witnessed series of protests by opposition parties, with a call for the country to return to the use of the 1992 constitution which imposes limits on presidential terms.

The agitation has led to a public outcry, with some persons including the MP for North-Tongu and former Deputy Minister of Education, Samuel Okudzeto Ablakwa, calling on the President of Ghana to intervene.

Already, twenty-six Togolese nationals are in the grips of the Police in Ghana, for attempting to stage an unlawful demonstration in Accra over the political situation in their country.

Speaking at a meeting with the chiefs and elders of Aflao in the Volta Region, President Akufo-Addo described the situation as worrying, adding that, he will play his part to ensure that the crisis is resolved.

“The events that have taken place next door in Togo, are disturbing for all of us and especially for you, I know what it means. I remember vividly in 2005 when the former President Eyadema died, there were problems over the succession. Over 100,000 refugees stringed across the border. Many of them I think are still there. They have not gone back to Togo, so I know that anything that happens in Togo is a matter of very great concern and it is a concern to me and the people of Ghana.

“The Togolese President came to see me in Tamale ten days ago, and we are talking to see how we can bring this crisis to a closure and bring stability back to Togo. It is in our interest to do so. The appeal we are making are falling on very sympathetic ears. I am not staying idle on this matter . We are acting. Let us pray for the blessing of the Almighty, and we can find a solution that will be in the interest of the people of Togo and by implication the people of Ghana.”

Political crisis
Togo's opposition parties have been demanding a return to constitutional term limits for the Presidency, and also for President Faure Gnassingbe to step down.

Gnassingbe has been in power since 2005 after the death of his father, General Gnassingbe Eyadema, who ruled Togo for nearly 50 years.

The anti-Gnassingbe protests, that have seen hundreds of thousands of people take to the streets across the country, have resulted in over 15 people killed and scores injured.

Three new street marches have been announced for November 7, 8 and 9, despite the Togolese government's ban on weekday protests.

But Ghana’s Minister of Foreign Affairs , Shirley Ayorkor Botchwey has indicated that “ The other ECOWAS countries are all engaged to ensure that everything is okay in our sister country in terms of their politics and adhering to their constitution.”