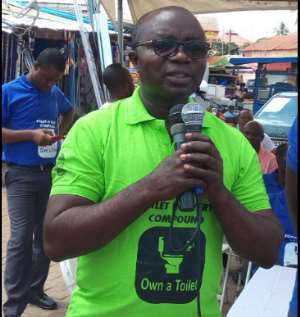 As part of the Sanitation Challenge for Ghana(SC4Gh) competition, the Kumasi Metropolitan Assembly (KMA), in collaboration with Water and Sanitation for Urban Poor and four financial institutions are in the process to assist residents of Ayigya and Moshie Zongo to secure financial support to build modern household toilets in the two communities in the metropolis .

The Sanitation Challenge for Ghana (SC4Gh) motivates Metropolitan, Municipal, and District Assemblies in the country to team up with their citizens and innovators to design and implement responsible liquid waste management strategies to transform the livelihoods of Ghana’s urban communities.

Addressing residents of Ayigya, a suburb of Kumasi, the Mayor of the Kumasi Metropolitan Assembly, Hon. Osei Assibey Antwi noted that the assembly is determined to win the Sanitation Challenge for Ghana contest hence their resolution to implement the proposed programs and policies developed and submitted for the Challenge . He said the project is also in line with the assembly’s policy of ensuring that liquid waste management in the metropolis is properly tackled.

He said statistics available shows that over 71% households do not have toilets, describing the situation as” very worrying and disturbing .” He said even though most households initially reserved places to be used as toilet facilities only to realize later on that those spaces have been converted into rooms for rent.

The Mayor hinted that the assembly would crack the whip on households that flout bye-laws of the assembly with regards to sanitation. "We are very determined than ever to make the city clean and healthy. In order for us to succeed we would need to be a little hash and firm. We do not want to start with any hash measures without adequately educating the general public.

“We are using all available means to educate and sensitize the general public on the need to maintain a clean environment. After the stipulated period we have set aside for this education, we would fully enforce our laws. We will plead that all residents of the metropolis respond to the call of K. M. A for a clean and healthy environment,” the Mayor stated and pleaded.

The Deputy Metropolitan Environmental Health officer who is also the lead strategist for the Sanitation Challenge for Ghana project (SC4Gh), Eric Gyasi, told journalists that the K.M.A is on course in implementing it’s sanitation policies.

“ We noticed that over 500 households in Ayigya and Moshie Zongo respectively dont have toilet facilities, so we decided to use these two Zongo communities as a case study for this project.

“We are offering households loans that are very flexible to be paid back within one and a half year period ranging from 2500 cedis to 6000 cedis depending on the type of toilet facility one wants and the materials the individual has”, he further explained.

Mr. Eric Gyasi thanked Water and Sanitation for Urban Poor and the four financial institution partners for embracing the program and the good will to offer financial assistance to residents who need modern toilet facilities in their homes.

He expressed optimism that the Kumasi Metropolitan Assembly would emerge victorious by the end of the implementation of its sanitation strategy.

Out of the 21 Duapa Award winning Metropolitan, Municipal and District Assemblies (MMDAs), 17 have met the minimum condition for the second stage (Dignified City Award) of the Sanitation Challenge for Ghana (SC4Gh). The 17 MMDAs have therefore qualified and are vying for the Dignified City Award of the SC4Gh, which has a total prize purse of GBP 1.285.

Come out and declare your commitment to fight against galams...
17 minutes ago