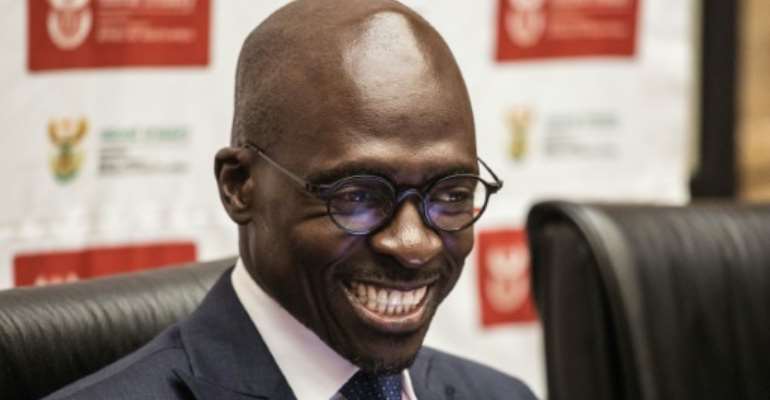 South Africa's finance minister received some faint praise last week -- not for the economy's performance, but for admitting the country is in a dire position that is set to get worse.

The daunting challenges recently caused business confidence to dip to the lowest level since the apartheid era -- reflecting wider fears that the achievements of the new, democratic South Africa are turning to dust.

Gigaba's budget statement on Wednesday slashed the GDP growth forecast for 2017 from 1.3 percent to just 0.7 percent, and revealed that by 2020, 15 percent of government revenue would be eaten up by debt repayment.

Much of the criticism has been aimed at President Jacob Zuma, who is accused of enriching a new corrupt elite rather than helping the poverty-stricken black majority.

"Gigaba is being more honest about the scale of the problem as he wants to put distance between himself and an increasingly unpopular Zuma."

'All its gory detail'

But Jonker warned that Gigaba's budget "did not offer a tangible solution for getting out of the low-growth trap," and added that the ruling ANC party could lose in the 2019 election as urban voters feel the pinch.

In his speech to parliament, Gigaba vowed not to "sugar-coat" the state of the economy and said that "the period ahead is not going to be an easy one".

The Business Day newspaper said he had "set out the situation in all its gory detail", describing the lowered GDP forecast as the moment that "the whole fiscal ship begins to wobble" for Africa's most industrialised economy.

The latest budget figures sharply increased the likelihood of further downgrades that would lead to the withdrawal of more foreign investment, higher borrowing costs and rising inflation.

Gigaba's speech triggered the biggest sell-off of government bonds since September 2011, and about 200 billion rand ($14 billion) could be taken out if the local-currency debt is downgraded.

Rating agencies are expected to scrutinise the expenditure ceiling that Gigaba said would be breached by nearly 4 billion rand this year -- in part due to the bailout of the chronically loss-making South African Airways. 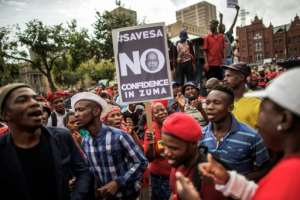 Unemployment is at a record high of 27.7 percent, more than half of the 56.5-million population live in poverty, and business confidence in August was at its lowest level since the mid-1980s.

One day after the budget statement, the rand fell to its lowest level against the dollar since last November.

The raft of grim economic data comes as tensions rise within the African National Congress, which will choose a new party leader in December to replace Zuma.

The race has exacerbated divisions, as Zuma appears to back his ex-wife Nkosazana Dlamini-Zuma against the other leading contender, Deputy President Cyril Ramaphosa.

Zuma will stay on as national president -- but some analysts predict the party could split, ushering in severe political uncertainty.

Gigaba was "at least frankly honest about the situation the country is facing," Sean Muller, an economist at the University of Johannesburg, wrote after the budget statement.

"The country's finances could worsen even further if the outcome of the governing party's elective conference in December doesn't see a return to good governance."

Muller said the economy was on a course that could "undermine the ideals and objectives of the post-apartheid era for many years to come".