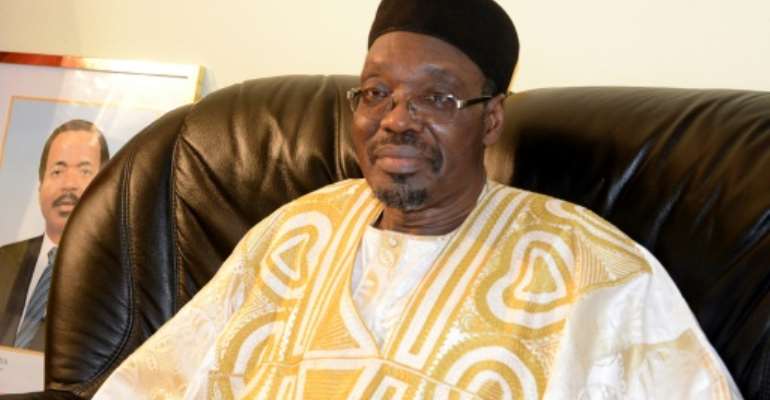 Cameroon government spokesman Issa Tchiroma Bakary, pictured here in 2014, accused the International Crisis Group of being against his country. By PACOME PABANDJI (AFP/File)

Cameroon on Wednesday blasted the International Crisis Group (ICG) as an "agency of destabilisation" after the thinktank warned an armed insurgency could erupt in the country's restive anglophone regions.

In a statement, government spokesman Issa Tchiroma Bakary hit out at reports published by the ICG on August 2 and October 19 that criticised a crackdown in the two English-speaking regions.

The October 19 report notably called on Cameroon to rethink a policy of "murderous repression" that, it warned, could lead to an "armed uprising".

Tchiroma described the ICG as "a veritable agency of destabilisation (of Cameroon), in the pay of the secessionist movements and shadowy interests whose only dream is to sow chaos in our country".

The ICG's claims of many deaths "are simply a clumsy attempt at disinformation that are phantasmagorical at the very least", Tchiroma said.

He accused the ICG of being in a "coalition in league against our country". Other members of it, he charged, included Amnesty International, Human Rights Watch and Reporters Without Borders (RSF).

French-speaking Cameroon has a large anglophone minority which comprises around a fifth of its population of 22 million.

Simmering resentment has fuelled a breakaway movement that on October 1 issued a symbolic declaration of independence for the putative state of Ambazonia, prompting a crackdown by a government firmly opposed to secession.

In the face of mounting protests in the run-up to the declaration, the security forces "responded with disproportionate force, leading to at least 40 deaths and over 100 injured protesters between September 28 and 2 October", the ICG said on October 19.

It pointed to the use of live rounds and excessive use of teargas.

Amnesty International says more than 20 people have been shot dead by security forces, and at least 500 detained. According to an AFP tally, at least 14 people died. The authorities give a toll that varies between 10 and 12 dead.

Headquartered in Brussels, the ICG is a not-for-profit organisation that describes its mission as providing independent analysis and advice to try to head off potential conflict.

In a new report issued on Wednesday, the group said the fight against the Islamist group Boko Haram in northern Cameroon had further strained "the already-delicate economic situation" there.