'NCA Must Face The Court For Backdating Fines' 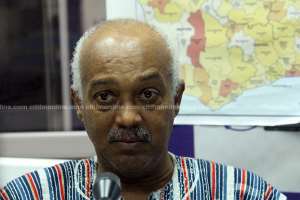 Financial analyst and social commentator, Sydney Casely-Hayford, has said the retrospective sanctions imposed by the National Communications Authority (NCA) on some radio stations must be challenged in court.

Speaking on Citi FM's news analysis program The Big Issue, he explained that, although he is not against the NCA sanctions on the defaulting radio stations, the regulator has broken certain constitutional provisions with the way the sanctions were imposed on 131 radio stations.

“The retrospective legislation to levy the fees in 2015, and taking it back to 2008, I think that is wrong, you cannot do that retrospective legislation, and then charge them the fees pegged from 2015. I think that is wrong and that can be challenged in court, and should be challenged in court, so we clear it once and for all” he said.

He emphatically stated that, any of the radio stations that fells the NCA hasn't acted fairly, can take the matter to court and have it addressed.

Mr. Hayford seem to be in accord with Sam George, the National Democratic Congress (NDC) Member of Parliament for Ningo Prampram, who argues that the NCA appears to have erred in its application of the law.

“Section 72 (1) (e) of Act 775, gives the NCA the power to manage and impose fines, and I have absolutely no qualms with that. However, any L.I or Act is subsidiary to the 1992 Constitution,” Sam George said.

“174 (2) [of the 1992 Constitution), which is where my argument is, says that where an Act enacted in accordance with Clause 1 of this Article, confers power on any person or authority (in this case the NCA), to waive or vary a tax as imposed by that Act, the exercise of the power of waiver or variation in favor of any person or authority, shall be subject to the prior approval of Parliament by resolution.”

Mr. Casely-Hayford, also stressed that, any of the radio stations that takes the matter to court should not base their argument on the fact that the sanctions are meant to collapse their business, since they clearly erred by not paying their fees.