Rising Cases Of Fire Outbreaks Compeling Many To Seek God 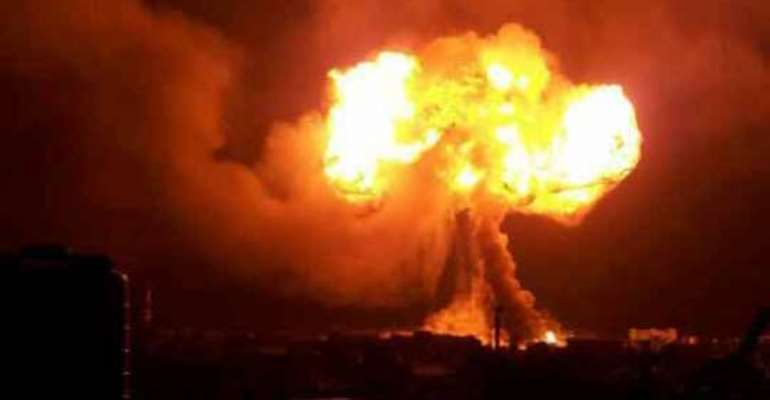 At least one soul was publicly won for Christ, while many others, who dreaded being consumed by the fast spreading inferno from the Atomic Junction gas explosions, resorted to ceaseless prayers at a farm, where they sought refuge.

More than 100 persons, who fled the disaster from diverse directions, ended up in an intense prayer session at a farm beyond Nsamanpow mu, near Madina, in the Greater Accra Region.

'We were Muslims and Christians; males and females; children and adults, who had run from all directions seeking divine help, and that's what we ended up doing,' said Madam Martha Annan, as she shared her experience at a meeting after church service on Sunday.

'I never knew a place like that existed in the city; a large farmland with a lot of bushes,' she said.

'We all prayed passionately; and some broke down. We got soaked in the down pour; but we didn't care, all we wanted was divine intervention to stay alive. This is like a preview of the End Times.'

Madam Annan, a Fire Officer, said when the alter call was made after nearly five hours of prayer, a young lady, who was scantily dressed in mini shorts and top surrendered to Christ, amidst cries of, 'I am naked; I am naked'.

'When we called her this morning, she was on her way to church,' Madam Annan said.

The Fire officer, who was returning home to Comet Estates, from the Rawlings Circle at Madina, said she had had to abandon her vehicle, in a place she could not recollect and ran for dear life, like others in the vicinity.

The disaster became the talking point at both formal and informal meetings across the city, with many blaming man for willful disobedience, which leads to disasters, while others praised God for a timely down pour that helped to douse the inferno, whose control appeared to be beyond human capacity.

'God is good,' Mr Peter Asem, a driver, told his friend at the Ashongman Estate Bridge Taxi Rank. 'With what has happened if you don't worship Him, then you deserve hell; the rain came at the right time!'

'When heard the noise and the light in the sky, I thought it was either the sun or the moon that was dropping, so I ran for cover; Ei, this experience is like the End Times o, I will never forget it,' his friend, Paa Sammy, said.

Gas explosion from the Mansco Gas Station resulted in an inferno that spread to the adjacent Total Filling Station to cause another explosion; lighting the skyline in the North-Eastern part of Accra and torching several property, including vehicles in its wake.

Motorists, pedestrians, hawkers, food vendors and residents in surrounding areas fled with some aiming for Aburi, in the Eastern Region.

In all, seven persons, as at midday Sunday, had been confirmed dead, with as many as 132 people suffering varying degrees of injuries.

Some have been treated and discharged, whilst many others are still being held in hospitals across the capital for further medical attention.

'It's a sad day for Ghana, yesterday's event was very tragic…It is a major tragedy, at the end of the day, this is one too many; And I think what Ghanaians really want is a solid policy to deal with this matter once and for all,' Vice President Mahamudu Bawumia said, after he visited the site of the disaster and the hospitals with the victims.