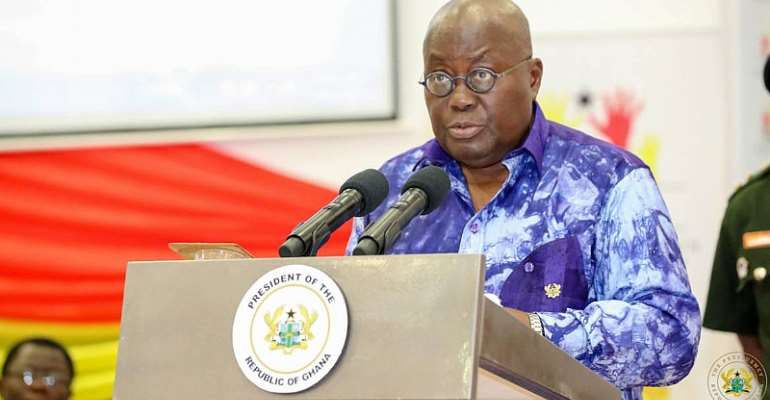 Today, the Ghana Palaver feels obliged to return to the subject of nepotism and cronyism-two phenomena that have gained roots in the Akufo Addo led NPP government. Hardly a day passes by without news emerging about the appointment of one relative or the other of the President into government or a state agency.

Despite repeated calls for a cessation of this worrying practice, it is has only worsened. On our front page today, we have reported on the award of a contract to a law firm owned by Gabby Otchere Darko, a nephew of the President, by his cousin the finance minister under dubious circumstances.

This adds to an already packed list of clear instances of nepotism and cronyism which undermines the credibility of President Akufo Addo. In the run up to the 2016 elections, he made an unambiguous promise at an NPP event in Kumasi last year that he will not operate a “family and friends government”

Everything he has done since becoming President has been the exact opposite. He has dished out appointments to family members and close friends like confetti while ignoring all ethical considerations.

Ghanaians are saddled with the unusual spectacle where close to 30 percent of Ministers who sit in cabinet are the President’s relatives. Today it has been possible for women with whom the President had amorous relationships in the past resulting in the siring of children to be given appointments in government.

We have witnessed situations where experienced and committed civil servants and public officials have been supplanted by relatively inexperienced relatives, friends and business associates.

Independent state institutions have been infiltrated by relatives of the President, calling into question their continues independence. Additional portfolios have been carved out specifically to accommodate the children of some powerful government officials at a time when hundreds of thousands of jobless youth have been told that the public sector can no longer employ them.

Also, regulatory agencies whose work ensure checks and balance in the polity, are brimming with cronies and allies of Ministers whose work they would have to scrutinize.

Who would have believed that in the twenty-first century, Ghana, a supposed democracy will relapse into an era where its President would have no difficulty being counted among the inglorious company of past despots who gave key government appointments to relatives in the mistaken belief that it will entrench them in power.

In times past, it was the Bokassas, Mobutus, Eyademas, Omar Bongos, Kabilas and Iddi Amins among others, who practiced this kind of nepotism and cronyism. For a man who had spent five decades of his life trying to be President amidst claims about his human rights and ethical credentials, we had thought that despite his advanced age, he would bring a breath of fresh air into our governance and act in a manner that sustains the democratic gains we have chalked over the years.

Alas we were wrong, for he is a chip of the old despotic block, who perceived governance as an inheritance and birth right which a closely-knit clan should make the most of to the exclusion of the majority.

He appears to believe in exclusionist governance which has been the bane of many a country.

We are inclined to believe that Akufo Addo’s victory in the 2016 elections and the margin by which he won has lulled him and his party and family members into a false sense of invincibility. They have come to believe that if in spite of all the chaos and violence they engaged in between 2014 and 2016 in their internal dealings, they won the election, then they must be a very special breed of human beings who can do as they please without consequence.

They are grossly mistaken. The Ghanaian electorate of today has gotten more sophisticated and they punish pig-headed politicians who take their mandate for granted.

Akufo Addo and his clan who are currently at the helm will be well advised that their actions have not escaped the watchful eye of the electorate and they should not mistake the silence of the majority or the hypocrisy of moral society to mean that they have been given a blank cheque to misbehave.

The day is coming when Ghanaians will have their retribution and they will be unforgiving.