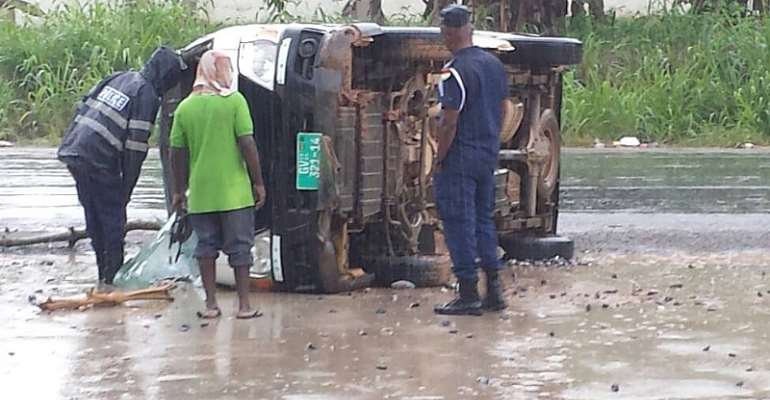 TWELVE STAFF of the Electricity Company of Ghana (ECG) on board in a Nissan believed to be an operational van, escaped death when the vehicle got involved in an accident at New Tafo Akim (Regimanuel Junction) on the Bunso-Koforidua highway in the East Akim municipality of the Eastern Region.

The vehicle, with registration number GV 321-14, reportedly somersaulted three times when the driver was said to have applied instant brake in an attempt to save a six-year-old school pupil who suddenly crossed the road.

The ECG staff were on their way from Anyinam to New Tafo after an official assignment when the accident occurred.

An eyewitness told this paper that due to poor visibility and the slippery nature of the road after a heavy downpour over the weekend, the driver couldn’t spot the kid and after the late application of the brake, the car knocked down the pupil, veered off the road and somersaulted.

The occupants, who sustained various degrees of injury, as gathered, were rushed to the New Tafo Government Hospital for treatment.

Meanwhile, the New Tafo District police have launched an investigation into the accident.