Poverty; Is It A Predetermined Fate? 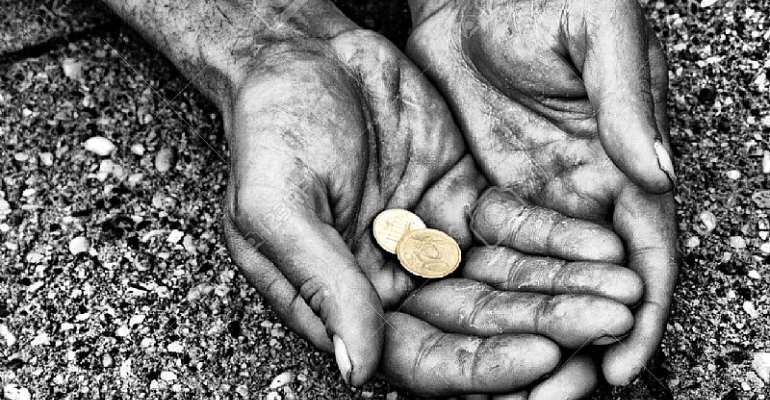 Poverty is the state of lacking something. In our world, we can also say Poverty is related to skint (Having no money). A man without physical cash but has lots of properties and possessions can’t be regarded to be poor. However, in the interim where one needs to feed himself; having an asset that can’t be converted into money in the short run classifies such an individual as being poor at that particular point in time if he has no money on him to make purchases.

Poverty is not genetic nor inherited, how an individual plans his/her life influences the chances of living in luxury or being poor. In the same way becoming rich is not an onerous thing to do, all it takes is a conscious effort to and being determined to achieve There is a saying that, “sleeping in the garage never makes a human being BMW nor Toyota Corolla”. This is to say that, coming from a poor home does not necessarily mean you are destined to be poor. The choices we make today, the decisions and choices of saving/investing or not determines the story of poverty tomorrow. Yes, you may come from a poor background but the story changes when you make a more informed choice to better your life to succeed. In doing so, you change your fate. So poverty isn’t anyone’s destiny but perhaps your decisions and actions may influence what becomes of your destiny.

Poverty is experienced when decisions that could have changed the situation are ignored for fear of present risk. Becoming better off does not require millions. You can actually write your success story with a penny you have right now, all it takes is developing a business idea that could start with the penny you have, having a positive mindset and being committed to that which you want to start or have started. The world is full of opportunities and it only materialize for those who takes the bold step to make it count.

There are few opportunities that you can grab as an individual including buying of sachet water in bulk quantity and selling or establishing a food joint which could be an indomie joint, Beans joint, banku and fish joint, salad joint, pork show joint or establishing a barbering shop and hiring a good barber to do the job. This is not to say, you don’t have to do government or private job? You can work for someone whilst someone else also works for you. The salary you receive at the end of the month shouldn’t be about food for your stomach and only chilling. In as much as consumption is necessary, so is saving or investment.

No one was born to be poor, the choices and decisions we make today determines what tomorrow will bring. Assuming, you receive an income of GHS 700.00 monthly from your employer, you pay your water and light bills worth 100cedis monthly, take away your consumption for the month let’s say GHS 400 then about 100cedis for some Friday night hangout with your friends leaves you with an amount of GH100. Trust me, you can save GHS100 and within 3months start a business with it to become your own boss.

It doesn’t require much to write your success story, it only takes a little and what business you can start the little amount with. In the example above, I assumed there wouldn’t be any unforeseen circumstance in the course of the month like sickness, buying airtime etc, however, assuming this individual after spending 400cedis out of his income also spends 200cedis on Friday night then it means he saves nothing. So in the entire year, he would end each month indebted as he would have to borrow to visit the hospital, buy airtime, send some cash to parents and to girlfriend if any etc. On the other hand, engaging in savings and later investing could elude that individual from economic hardships, pressure and poverty.

There may be some elements in this write up that you may disagree with but on the whole the main idea is to let you understand it takes little to escape poverty. Poverty however isn’t a spell cast upon an individual to totally subdue your life for eternity, the persistence of poverty in each successive day of your life indicates there’s a decision you haven’t taken yet. So in effect when things do not go on well, you have no reason to squawk because you had the opportunity to turn things around and you preferred to blow it away for something else.

It isn’t your destiny to be and neither can anyone make you poor, invest and see the difference. God bless you; God bless Ghana, God bless us all.