Behind The Murder Of Major Mahama Lies Several Untold Truth 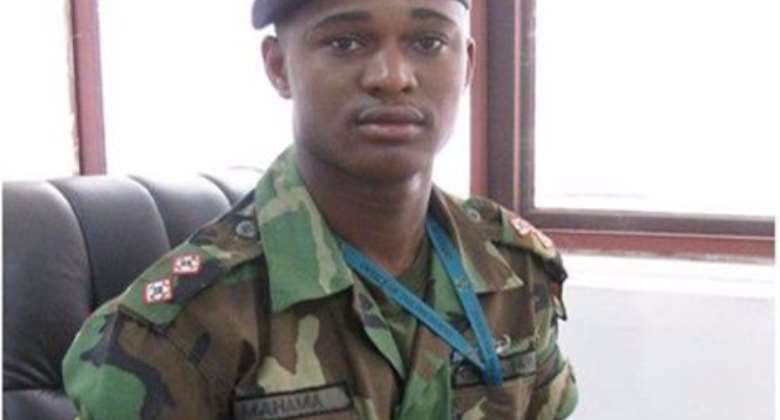 I am deeply concerned and ashamed about how we as a people have allowed hypocrisy to cloud our sense of judgement and reasoning on the Major Maxwell Mahama issue when we as a people have taken everything for granted. On the 1st of March, I published an article both on my blog and on modernghana entitled “Mob Justice, A Pain in The neck of the Rule of Law.” (Click the link to check it out https://elormtalent.blogspot.com/2017/02/mob-justice-pain-in-neck-of-rule-of-law.html ) but the culture of I don’t care has brought some unbearable consequences to those in authority and now they are running helter-skelter to deal with the mess.

Before I begin, I entreat all readers of this article to have an open mind as I have and see the issues from the angles I will be hitting it from. This are deep waters I am about to enter and I will try as much as possible to tread cautiously, although not cautiously enough to leave stones unturned. I am fully aware of the hatred I may receive after I am through with this piece of thought. That notwithstanding, truth must always be told no matter how painful it might be. I will not be bothered also by the several tags I may receive just for speaking the truth. I write this not to put more tears on the faces of the bereaved family, but to straighten out a few rough edges.

To start with, I must say categorically and emphatically that, I condemn the various events that led to the catastrophe we are dealing with in this times especially the murder. No person deserves to die a horrible death as such no matter how evident the conviction levelled against such a person is. It is barbaric, uncivilized and woefully wrong for someone to be lynched in such gruesome manner.

That notwithstanding, I am particularly not in the least happy about how we have handled the Maxwell Mahama issue. Why do I say this? Is this the first time someone has been lynched and gruesomely murdered by a mob in this country? Secondly, have the law taken its course in the uncountable incidents of mob justice in this country? Are the victims of the previous lynches not human beings and more importantly citizens of this country? Why then is Maxwell Mahama different from his predecessors many of whom have not even merited a police enquiry? I am aware you have an answer to all the above questions. I was glad to hear renowned pastor Mensah Otabil say that the Major’s murder was a part of our culture on display. He says, we lynch people every day and nothing is done about. Thus Major Mahama’s lynching was part of a culture we have nurtured. This is unarguably true due to the numerous victims I have cited above.

Many are they who have been accused of witchcraft, same sex relationship, armed robbery, theft and what have you. Many of these victims of mob action are never regarded by the law enforcement agencies. There have also been several people who have in one way or the other lost their lives in the line of duty such as police officers, presidential press corps members among others, but none have I recalled that a former president has offered to cater for their families neither have I recall any government intervention in the survival of their loved ones apart from the pension due them. I can unequivocally state that, all this feeling of sympathy towards the family of Maxwell Mahama reveals the spirit of two-facedness we have embedded into our culture. Is it because his uncle is a former president of the republic or what are we trying to tell ourselves? Why should Maxwell Mahama be given a preferential treatment when nobody can ascertain the truthfulness of the stories being told?

According to the suspended DCE, he was protecting some Chinese illegal miners in the area that led to his gruesome murder. Although his statements are unsavoury the time he uttered them, we must not be quick to discard off such an allegation. In the same stratum, the military high command claims that he was working as a part of the galamsey taskforce that was set up under the ex-while Mahama administration. Who is telling the truth? The fact that he is part of a taskforce does not mean his work in the area was in the interest of the state. We all know how money and women can have an influence on even the most perceived righteous and incorruptible mind. These are very powerful tools that are aiding in the breeding of corruption in our country today. Can someone say unequivocally that Maxwell is incorruptible? No because no human is incorruptible. This case is a two-edged case and needs to be solved as such. The first part is the murder of Major Maxwell Mahama. The second is what led to the murder of the Major. The second aspect is very critical. I am not talking about what happened the morning he was killed. I am talking about a full investigation into the activities of Mahama’s squad because that to me is the source of the murder. The fact that they are there as part of a galamsey taskforce does not mean there cannot be any incident of foul play. Every action is a reaction to a previous action they say. This is very important because during the morning of the incident, Major Mahama himself infringed upon a few military codes of conducts. That is why I think Mr. President erred in decorating the fallen Major to a Major.

As we all cry ‘Justice for Maxwell Mahama’, we should know that as a people, we have become hypocrites. Justice for Mahama would be an even more injustice to those who were victims of mob action and their deaths were not investigated and the perpetrators dealt with according to the laws of the land. If Mahama deserves justice, so does that poor boy or girl’s mother or grandmother that was wrongly accused of witchcraft and was instantly given justice. In the past few days after the Mahama incident came to the public domain, many other incidents of mob action have been reported all across the country. I can bet on it that, none of the reported incidents would receive the needed logistics to bring the perpetrators to book as that of Mahama? Very soon, if the police would say something at all, it will be that they were unable to fish-out the culprits and that is the end. These are some of the laxities in the system and law enforcement that has fuelled and funded the growth of mob justice in our country in the first place.

Do not get me wrong, I am not in any way saying that the culprits in the Mahama case should be left to walk our streets free. No. I am just saying that the situation whereby the majority poor and vulnerable in society are left at the mercy of injustice whilst the minority few always use the resources of the country to get justice for themselves is wrong. It is high degree theft. Mahama being a soldier does not in any way make him more special. As per the laws of this country in chapter five, article 17(1) of the 1992 constitution of Ghana, we are all born equal before the law and we are suppose to be treated as such. Major Maxwell Mahama is not in any way better than the St. Paul’s Senior High student that was lynched some time back for engaging in same sex intercourse. Neither is he better than the woman who was stripped naked and lynched in the Kejetia market in Kumasi. They are all citizens and deserve justice.

If the police can arrest and arraign before court forty-two (42) suspects of the case in just four days, they have no excuse in solving other crimes in our country.

Justice offered to a few is an injustice to the many. May the Almighty grant all victims of Mob Injustice who lost their lives a peaceful rest in his bosom.