Immortalising Major Mahama, A Manifestation Of Our Failures To Crack The Whip On Mob Action 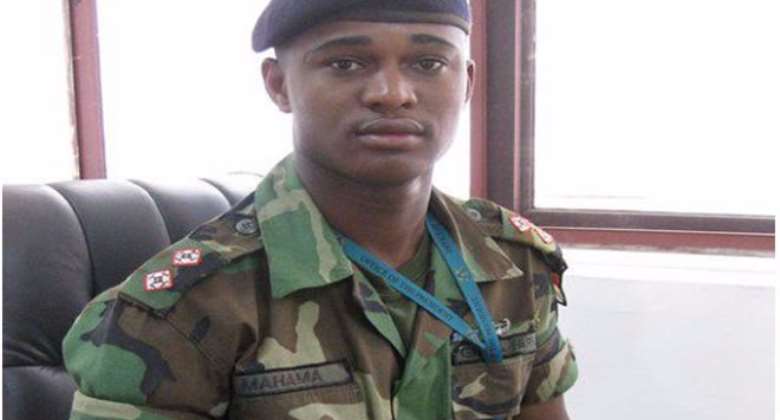 On the 29th of May, 2017, video of a fallen soldier who went down fatally via barbarism of a mob in the Central region went viral on social media and news platforms. Two years down the lane, the nation has not yet forgotten and those in authority are immortalizing the fallen soldier who they are yet to find justice for, with a statue at the Airport Hills Roundabout. The unveiling, which took place on the 29th of May, 2019 marks exactly two years since Ghanaians learned to their horror that, the young Captain with the 5th Infantry Battalion had been clobbered to death in Denkyira Obuasi. He was stationed there to check the menace of illegal mining. The statue is being erected as a way of campaigning against mob action in the country.

About eighty people were initially picked up by the police as suspects when the news broke of this barbarism in Obuasi Denkyira. Two years down the lane, how many of the suspects has remained in the grips of the police? Has any of them been convicted and sentenced for their involvement in the murder of the military officer? What then are we immortalizing?

One may ask, does Captain Mahama deserve the numerous plaques being conferred on him in his absence? Someone may say, he was an ordinary military officer who was posted to perform his duties at Denkyira Obuasi just like any other Civil or Public Servant in the country. Is he the first civil servant to become a victim of mob justice? Or it is a norm that all those who die in service of the country must be immortalized. If so, then it is expected that, in about two years to come, the teacher who was brutalized to death at Asiakwa, a few months ago, will also be immortalized.

Originally a Captain until his untimely demise, Maxwell Mahama was promoted to the rank of a Major days after his demise. Many media houses eulogized whatever they thought was his achievements. As if that is not enough, a statue has been erected in his honour once more. What will be next? Street naming or renaming of a national statute. All these efforts are meaningless so long as the perpetrators of this barbaric act continue to walk as free men and women. All this commendation for Major Maxwell Mahama is seen as an act of cloaking the failures of structures of governance in this country. Why were the police not able to find any valid evidence to tie this people to a gruesome murder? Is it a thing of incompetence or unavailability of resources? Whatever the shortcomings of the Police may be, I do not see that it cannot be given a facelift.

If Mahama deserves a statue at Airport Hills Roundabout, then the poor woman, whose name we cannot even mention, who was beaten to death in the Makola market in 2008 whose crime we cannot authenticate, also deserves a statue around the Tetteh Quarshie Interchange. So is the poor boy who was wrongly accused of stealing, which merited his brutalization in Kejetia market also deserves a statue at the Ashaiman Roundabout. So is the teacher who was beaten to death by students in Asiakwa, he equally deserves a statue in front of University of Ghana. It is looking as if only some selected few are bequeathed with such respect even when they are no more. Mob brutalities have been with us for a very long time but then governments and stakeholders saw no relevance in tackling it head on. If for nothing, one may say, it is good it happened to whom it did at the time it did because at least something irrelevant is being done about it.

If the killers of Major Mahama are still walking as free men and women, two years after his demise, then, we should cloak our faces in shame. The fact remains, even in the wake of erecting this statue, which is staring down on all road users in and around Airport Hills Roundabout, so long as the whip is not cracked on the perpetrators to send an echoing message to those who may be nurturing such contemplations, mob justice will remain a menace and soon become a art, music, and literature of the Ghanaian people.

Avoidable and undue delays in our justice delivery system as we all know, is the major motivation for mob justice. Most people especially the vulnerable in society have no trust in the structures to vigorously deliver time conscious justice at an affordable rate. As it stands, the fuel for its growth lies in the fact that, our courts are still not properly furnished to deliver on time. So is the Ghana Police Service. Equipping the Police CID and relevant state institutions to deliver on their responsibilities in reasonable time in cases like this would have been a more desirable and applaud-able gesture rather than a statue.

If it can happen to Mahama, then everyone can be a victim. Should we lay in wait for the next victim before we make noise again? Your guess is as good as mine.