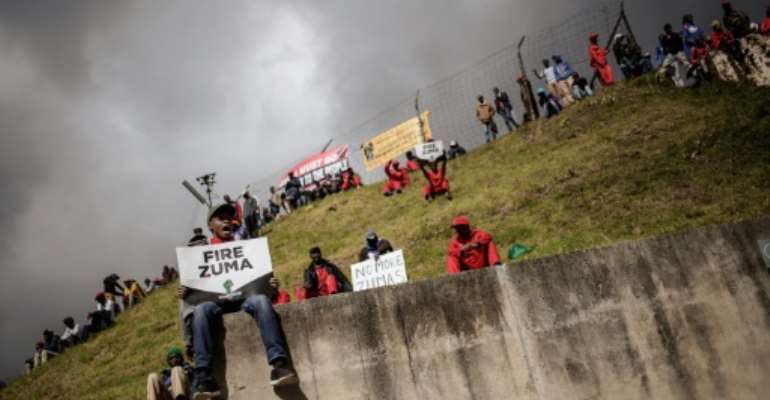 South African President Jacob Zuma is facing a growing wave of criticism over his implication in a series of corruption scandals. By GIANLUIGI GUERCIA (AFP/File)

"The information is coming up -- it's quite damaging to the ANC. It damages the ANC because... many of the people who are cited there as beneficiaries of the Guptas are leaders in the party," said Mantashe.

"We are paying the price for that," he told foreign journalists in Johannesburg.

The ANC -- which Nelson Mandela led to power in the 1994 post-apartheid elections -- is hoping that a proposed judicial inquiry into the allegations will help salvage its credibility ahead of the 2019 national elections.

Last year, a report by the state ombudsman called for a probe into allegations Zuma allowed the Guptas to have unprecedented influence over the government -- including letting them select ministers.

"We should be putting pressure on (the inquiry which) must move as fast as possible so that we don't stay with this hanging in the air for a long time," he said.

"The longer it takes the more costly it is for the ANC."

The party is due to elect a new leader in December when Zuma, who took office in 2009, steps down.

"We are hoping that we will work together and select the best person," said Mantashe.

"We want a president who will not have the temptation to be corrupt and loot."

"There are more good leaders than bad leaders in the ANC," said Mantashe.

The ANC has lost popularity in recent years, taking just 55 percent of the vote in last year's local elections, its worst ever result.