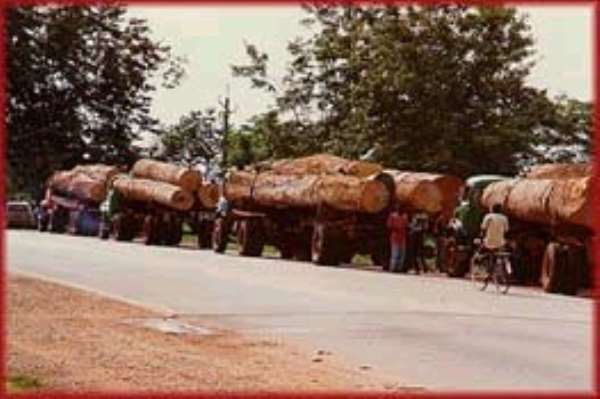 Takoradi, April 29, GNA - Ghana earned Euro 40,665,231 euros from the export of 104,920 cubic metres of wood products in the first quarter of this year, the Timber Industry Development Division of the Forestry Commission said on Friday.

"In comparative terms, therefore, the January to March 2005 cumulative export value and volume registered modest increases of 9 point 10 percent and 5 point 29 percent respectively over those of January-March last year".

It said the export of secondary wood products comprising mainly lumber, plywood, veneer, boles and sleepers formed the bulk of the products mix and contributed 34,574,724 euros or 85 point 02 percent in value and 94,197 cubic metres or 89.78 percent in volume during the first quarter of this year.

The statement said wood products exports from the tertiary sector of the timber industry, including furniture parts, profile boards, mouldings, dowels, flooring and broomstick were bestowed with a lot of export incentives such as the waiver of export levies payable on secondary wood products.

It said the incentives were designed to assist the sector to re-position itself for effective and maximum utilization of the timber resource base for increased yield and higher export earnings.

The statement said, "Unfortunately tertiary products export is yet to register the desired impact on the timber trade and industry both in value and volume."

On direction of trade, the statement said the European markets, notably Italy, Germany, France, the United Kingdom and Belgium, purchased 23,180,000 euros or 57 percent of the total wood export sale in the first quarter of this year.

The statement said the Asia and Far East market led by India imported 5,900,000 euros worth of wood products or 14.51 percent of the total wood exports value for the quarter of this year.

"India purchased 5,238,716 euros wood products, the bulk of it was air-dried teak lumber, making it the third single largest consumer". It said, "Ghana enjoyed less trading intercourse with the ECOWAS market. Except Senegal and Nigeria which purchased 1,467,016 euros and 822,535 euros respectively making them the eighth and tenth largest importers out of fifty-six importers for the quarter the market proved quiet dormant".

The statement said the total ECOWAS wood products imports from Ghana amounted to 2,402,945 euros or 5.91 percent of the total exports for the period.