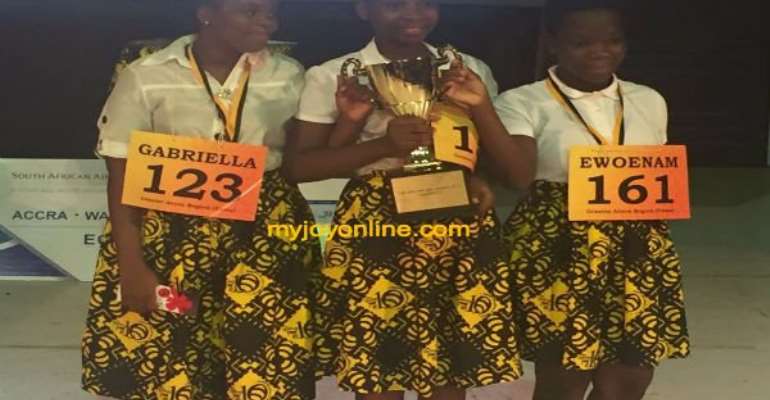 The Spelling Bee at 10 edition started with 197 students who were vying to be the best speller in Ghana, but 12-year-old Lily Ama Tugbah emerged the winner.

“Thanks to the Spelling Bee competition, I have been able to build my confidence and I can speak in front of an audience now,” an elated Lily told Joy News.

The Accra International Conference Centre was a sight to behold last Saturday as parents, teachers, head teachers, family and friends as well as students from numerous schools across the country gathered to witness the finals of the competition.

For most of the parents, it was a mark of pride to have their child walk up to over one thousand people to spell a word that most adults cannot spell or have no idea about.

“I was not perturbed because I know Lily very well and I knew she could spell the words,” a proud mother said of her daughter.

For a child who could not lift her head at church to read Bible verses, Lily's mother is excited her daughter has upped her game when it comes to public speaking.

“She could not stand being on stage, during children’s day in school although she has memorized her part well, she comes back crying. Since her first spelling Bee encounter, she is now bold, courageous and well exposed,” proud Mrs Tugbah said.

There were seven challenging rounds of spelling with the numbers being reduced each time a speller fails to get a word right.

The numbers were trimmed down to 72 after the second round. Each round was an anxious one for teachers, well-wishers, coaches and especially parents whose favourites were progressing in the competition.

Not only were they sitting on tenterhooks as their favourtite stood before the judges, but they were also praying for luck to shine on their favourite to get an easy word to spell so they make it to next stage.

Although the competition needed at least 25 spellers to proceed to the fourth round, less than 20 spellers qualified.

However, those who had dropped out from the round were invited back onto the stage and given another chance to try their luck again. Fifteen spellers made it and joined the other already qualified spellers.

“This is my third time of trying partake in the competition. Although I knew I would do well, I didn’t know I would win it,” Lily said.

The 30 finalists were given medals for their feat by the American Ambassador to Ghana, Robert Jackson, who congratulated all the children who participated especially those who made it to the next round.

He urged all the spellers to work harder.
From the fourth round onwards the round robin-structured competition had those who are unable to spell leave the competition for good. 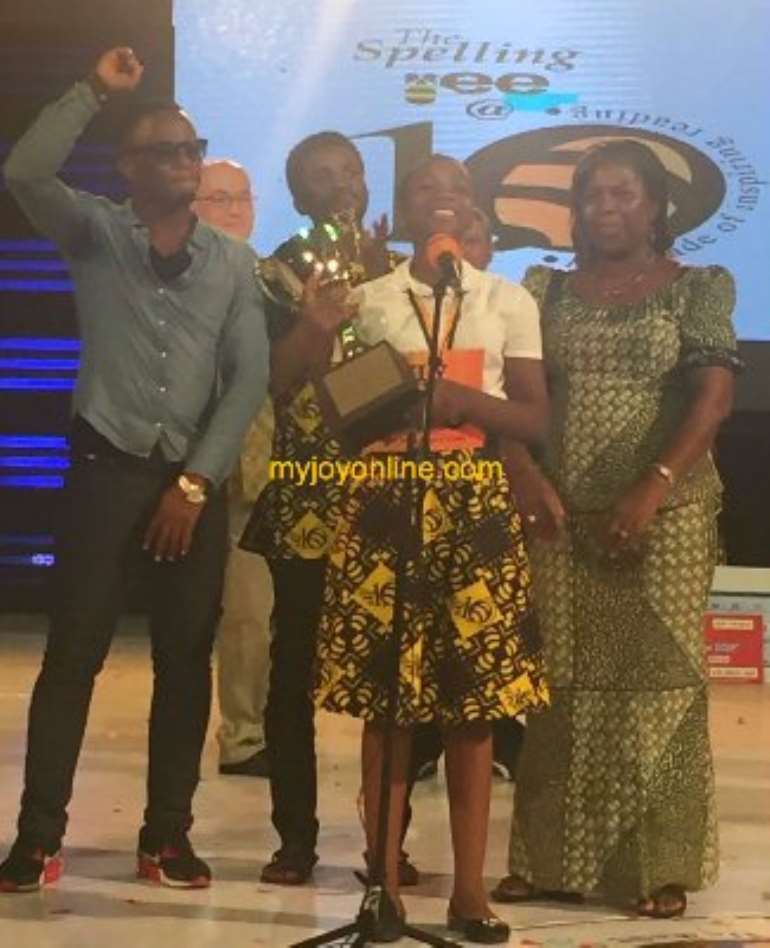 “I was not sure if I would have come back to compete next year if I were not the second runner-up,” Ewoenam Afetsi, 13 and a student of SOS Herman Gmeiner school said.

The young spellers showed dexterity as they asked the instructor for the origin of words, its usage in a sentence as well as the different pronunciations before they go on to spell them.

“I won’t say I know or have come across some of the words I was asked to spell,” contestant 123 and first runner up, Gabrielle Ellis, 12, said.

In the fifth round, the spellers were tasked to spell the words pacimology, auricular, presbyopia, hauteur, kuru, rariola, turbinado, vinaigrette and proselytical.

Round six had seven spellers with words like ciborium, acaulescent, hegemony lanceolate, vexillology -- words that decided the fate of the competitors.

That was contestant number 150’s time to shine as she was the only person standing after she struggled to spell hegemony.

A teary Lily was alone on stage beside herself with joy…but wait…there is yet another hurdle to jump! She had to spell the championship word or the last seven contestants would be brought back to begin the round.

“It was a delight to watch her…because I knew how much she wanted this and the sleepless night she had put in,” Mrs Tugbah said.

Lily took the stage and with a little struggle she spelled the Championship word, “…B-A-C-U-L-I-F-O-R-M…,” as the whole auditorium erupted with cheers, cries and applause.

She received GHC10,000 from Ecobank, a DStv HD decoder with a year’s subscription, all expenses paid trip to Multichoice studios in South Africa, GHC10,000 from Indomie and many other goodies from sponsors.

The event was sponsored by Multichoice Ghana, South Africa Airways, Ecobank and Indomine.