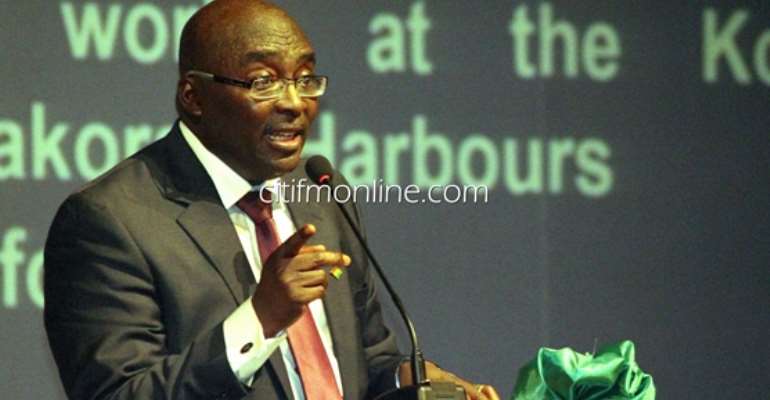 The Vice President, Dr Mahamudu Bawumia has expressed shock at a seven billion (GHؓ¢7,000,000,000) cedi hole in government's accounts left by the immediate past administration.

“In preparing for the budget we realized to our shock that expenditure amounting seven billion cedis was made by the previous government but never disclosed,” he stated.

According to the Vice President, the gap was detected for the period between 2014 and 2016,

“How are you supposed to manage an economy with faulty data…we have to emphasise that getting that data right is really very key because it throws the entire budget into disarray because we are going into 2017 and suddenly you are told by the way there’s seven billion that you have to pay next year that you didn't anticipate. This is the reality.”

Speaking at the launch of the Ghana Corporate Governance Initiative in Accra on the Role of Integrity and Transparency in Accelerating Ghana’s Development, Dr. Bawumia further bemoaned the lack of integrity in some of the economic data they had been bequeathed by the NDC administration.

“In the management of any economy, there’s nothing that can beat the integrity of your economic data because if you don't have data you have major problems and this is why we really need to emphasise the integrity of data,”the Former Deputy Governor of the central bank further asserted.

The Vice President is the Head of Government’s economic Management team, working to prepare the next budget, to be presented in March.

Dr Bawumia also reiterated government’s commitment to addressing the issue of National Identification, noting that a credible national database was essential to formalizing the economy and enhancing economic development.

Dr Bawumia also stressed the importance of a national address system to improving the ease of doing business and reducing opaqueness in the economy.