Bawumia Shocked Over $14m Veep House… Is It Made Of Gold? 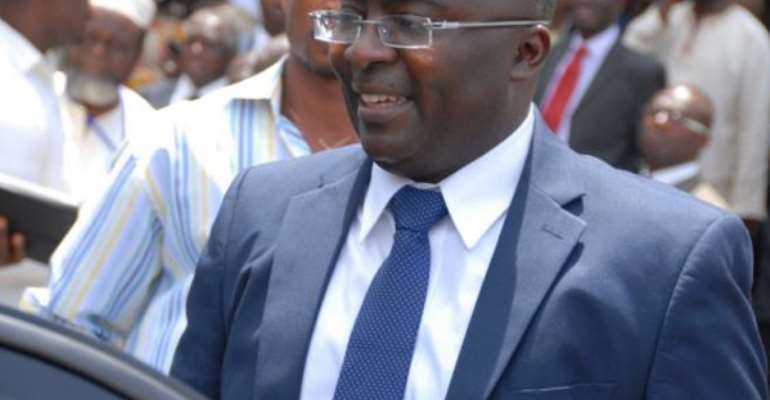 A new official and permanent residence for all vice presidents which is under construction off the Switchback Road, Cantonments in Accra, is said to cost a staggering $13.9 million.

The Vice President, Dr. Mahamudu Bawumia, who revealed the cost, said currently work on the residence had stalled due to lack of funds.

He made the revelation yesterday at the launch of Action Chapel International's Good Corporate Governance Initiative in Accra.

The contract for the construction of the new residence was awarded under the erstwhile John Mahama-led administration.

An official tower-block office complex occupied by the Chinese technology company, Huawei, overlooks the residence of the vice president of Ghana, exposing him to security risks.

Dr. Bawumia, who was discoursing on a wide range of issues such as corruption, transparency and good corporate governance, paused briefly to talk about the cost involved in the construction of the official residence, which was put up by the Mahama administration because the then president had appropriated the official vice presidents' house at East Cantonments.

Ex-President John Mahama had stayed in the vice presidents' residence for eight years after which he asked the state to offer the building to him as part of his end-of-service package, only to backtrack later following furore that greeted the request.

Mr Mahama, who is apparently considering a comeback, is still ensconced in the vice presidents' house he occupied, even though initial report had suggested that he had packed out.

“There was this whole brouhaha about this vice presidents' residence…I am sure you heard about it, so in the context of discussing this issue there is supposed to be an official vice presidents' house under construction.

“So I asked why the project is being delayed, and they said well the contractor is owed a lot of money. And I ask how much is this money and how much is this house costing and I was shocked when I was told about the cost.

“Can you believe in Ghana we are building a house to house our vice president and it is costing $13.9 million?” Dr Bawumia queried.

Gold Blocks
According to him, the project was too costly by any standard, questioning whether the blocks for the building as well as the gate are made of gold.

“I could not believe it…what sort of a house is it supposed to be…I mean is the gate made of gold? The pavement made of gold? And blocks made of gold? How many boreholes can we make out of that?” he queried.

The vice president was of the conviction that the building of the house did not go through competitive tendering.

“Of course, I am 100 percent sure that it did not go through competitive tendering, otherwise we would have known about it. It was most likely it was sole-sourced and there it stands uncompleted at the moment.

“This is just an example of many contracts that we don’t have value for money for. I think it just makes sense that we put these contracts publicly so that everybody knows who is bidding and what the decision is. This will help all of us to emphasize the issue of value for money,” he said.

'Enforce Procurement Act'
He stressed the need to make the procurement exercise very transparent, promising to pay a visit to the Public Procurement Authority (PPA) soon.

“The resort to sole-sourcing of contracts has been more rampant which is not supposed to be the case. “We want to ensure the strict enforcement of the public procurement (Act 663). It is an Act which in my opinion and that of many has been abused recently,” Dr. Bawumia said.