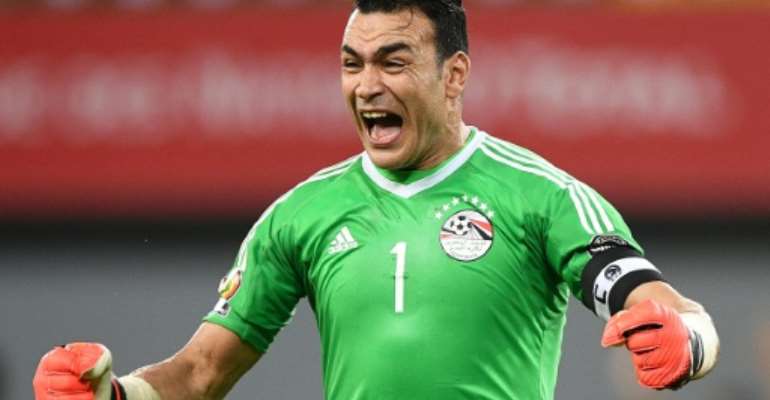 Goalkeeper Essam El-Hadary's clean sheet has been key to Egypt's progress to the Africa Cup of Nations semi-final. By Justin TALLIS (AFP/File)

Libreville (AFP) - Weariness will worry Egypt as they seek to extend an Africa Cup of Nations semi-finals winning streak to six matches by beating Burkina Faso in Libreville Wednesday.

Many pundits believe this could give the west Africans an advantage at Stade de l'Amitie in the Gabonese capital, especially if the match went to extra time.

Argentina-born Egypt coach Hector Cuper admitted he was concerned about the shorter recovery time his team have compared to Burkina Faso.

"It is not an ideal situation, but we have no choice but to adapt," said the greying 61-year-old former Valencia and Inter Millan manager.

"The players will be given time to rehabilitate and hopefully they will be ready come Wednesday night."

A calf injury rules out Arsenal midfielder Mohamed Elneny and striker Marwan Mohsen is a doubtful starter owing to a knee problem.

Despite the disadvantages, record seven-time African champions Egypt will be expected to continue a remarkably successful semi-finals run spanning 31 years.

Egypt have reserved some of their finest performances for the last-four stage, thrashing Didier Drogba-led Ivory Coast 4-1 in Ghana and Algeria 4-0 in Angola.

A wide winning margin against the Burkinabe Stallions is unlikely, however, as Egypt have clawed rather than cruised past opponents in Gabon.

While scoring only three goals -- an average of one every 120 minutes -- must trouble Cuper, his team are the only one not to concede a goal in this tournament.

Much credit for that goes to goalkeeper Essam El Hadary, who turned 44 this month and became the oldest footballer to play at a Cup of Nations.

"He is first on to the training field and the last to leave," said Cuper in admiration of an Egyptian chasing a fifth Cup of Nations winners' medal.

El Hadary was part of the squad that went to Burkina Faso 19 years ago, and beat the hosts 2-0 in the semi-finals en route to lifting the trophy.

Morocco did give the veteran shot-stopper moments of severe anxiety from crosses -- a fact that will not have gone unnoticed by Burkina Faso coach Paulo Duarte.

Given the outstanding semi-finals record of Egypt, the Portuguese handler studiously avoided making any gung-ho predictions.

"We dream of doing better than in 2013," he said, referring to the 1-0 final defeat by Nigeria in South Africa after a giant-killing run.

"My team is capable of producing fantastic football. There is quality and confidence among the boys."

Like Egypt, Burkina Faso enter the semi-finals boasting an unbeaten record after victories over Guinea-Bissau and Tunisia and draws against Cameroon and Gabon.

Cameroon captain Benjamin Moukandjo beat him with a free-kick and 2015 African Footballer of the Year and Gabon captain Pierre-Emerick Aubameyang converted a penalty.