The letter announcing the dismissal of all Metropolitan, Municipal and District Chief Executives (MMDCEs) is unconstitutional because it was signed by an appointee who has no executive powers, a member of the opposition National Democratic Congress’ legal team Abraham Amaliba has claimed.

According to him, the minister-designate, Hajia Alima Mahama, has no authority to sign such a letter.

“Hajia Alima Mahama is not clothed with the powers as a minister. She cannot be signing letters dismissing (MMDCEs),” he told Benard Nasara Saibu on Morning Starr Friday.

“It is against the constitution,” he added, and that she cannot be doing acts for “persons that are duly elected.”

President Nana Akufo-Addo on Thursday issued a directive that all MMDCEs across the country should vacate their post with immediate effect.

The directive was contained in a letter signed by the Local government minister-designate, Hajia Alima Mahama.

“By virtue of article 243 (3) (b) of the constitution of the republic, H.E the president of the republic has revoked the appointment of all MMDCEs with immediate effect. In this regard all MMDCEs are directed to handover their relevant duties to MMCDs for further instruction,” the letter read in parts.

The MMDCEs were appointed under the Mahama-led administration. 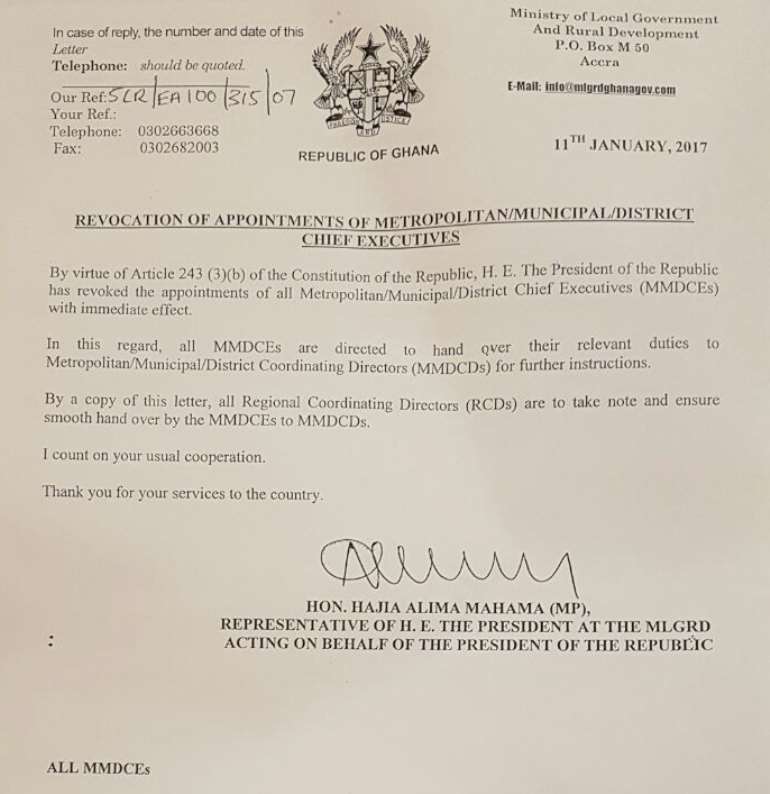 The letter
Meanwhile, the President has nominated 36 ministers-designate who will be vetted by the Appointments Committee of parliament from January 20.