Kufuor congratulates Annan on his exoneration 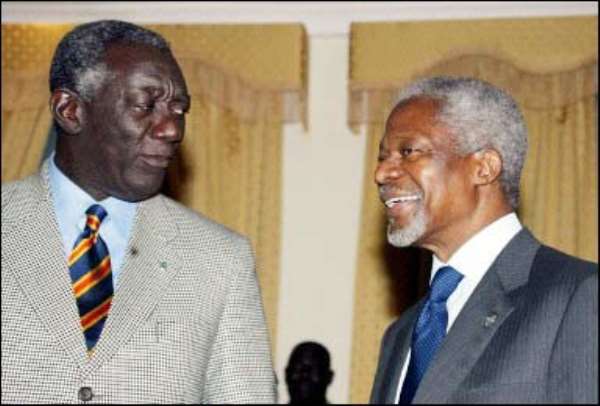 Accra, March. 30, GNA - President John Agyekum Kufour, has sent a congratulatory message to the United Nations (UN) Secretary-General, Mr. Kofi Annan, on his exoneration by the independent inquiry into alleged improprieties in the UN Oil-for Food Programme for Iraq. This was contained in a Press Release signed by Mr. Kwabena Agyei Agyapong, Press Secretary and Presidential Spokesman, in Accra on Wednesday.

The release stated, "I am very delighted that the Independent Inquiry Committee that probed the alleged improprieties in the UN Oil-for Food Programme for Iraq has, as we expected, firmly established your innocence."

It stated further: "The government and people of Ghana join me in congratulating you on this happy occasion and in re-affirming our confidence in your leadership of the United Nations through this difficult period of change and reform."

It said the Secretary-General could count on Ghanaians continued support as he endeavours to redirect the energies and resources of the UN towards bringing peace and prosperity to all of the world's peoples.

"Accept, Mr Secretary-General, the renewed assurance of my highest consideration", the statement added.