Illegal Mining Could Be A Blessing. Part two(2) 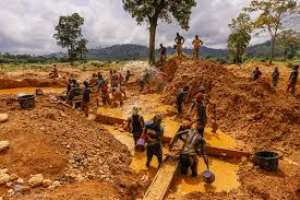 In my earlier rendition, which received a wide publication across the media landscape almost two weeks ago, I lamented on some of the dire ramifications of illegal mining and how we can turn the misfortunes of illegal mining to fortunes and hence the above title. I thank my editors and publishers for doing a good job. You can read it here if you had not read. This will enable you align the issues since this piece is only a continuation.

The issue still remains dear to my heart and I will continue to succinctly state what is fueling it in recent times.

I don't need to repeat that mining is one of the most lucrative ventures in Africa and elsewhere and people naturally will want to explore in that area to make a living. People of all ages are therefore seen in the mining sites trying their luck.

Of course, the major cause is the increasing unemployment in the country. Unemployment continue to be an albatross on many developing countries like Ghana. This affects the economic conditions of the people who must live at all cost.

Remember life is a natural right and not a privilege. We have a section of the elite class, middle school leavers and the illiterates who rule themselves by the natural principle of survival of the fittest. This has left few alternatives of making a living in the hands of these poor but capable human labour. Many of them have therefore taken up illegal mining as a chosen vocation. This is the more reason why I think we can use that to change the destiny of such youth.

Poverty is the direct outcome of unemployment and inadequate opportunities for the vast majority of citizens. There are many who are not able to meet the increasing cost of living in the country. Students from poor backgrounds use illegal mining to sponsor their own education whilst some parents also depend on that to take care of their families.

I personally think that it is better than engaging in social vices like armed robbery, stealing, prostitution, internet fraud among others. If you ever visit a galamsey site, you would testify that indeed, those who engage in it are hard working as they work in terrible conditions with ambitious mindset of making life comfortable.

Frankly, speaking, a lot have made it through this illegal mining.

I know a couple of friends who have built beautiful houses and drive latest cars from their toils in that dreadful but lucrative business. Any attempt to abolish it therefore, means that a lot more development challenges would be precipitated directly since those who consider it a salvation, will have nothing to depend on than doing the unthinkable for survival.

More importantly, I think government should also be blamed because the worse offenders of this act are the foreigners (mostly Chinese) who are all over with heavy buzzing machines excavating our virgin lands for minerals. It is conspicuous that their actions rather cause more harm to our environment. The question I ask is, who gives them that authority to excavate our lands and how much do they contribute to our national development? If our poor youth who are into this business have had the chance of using such sophisticated machines, I believe they could have been in a better position to contribute significantly to our national development. We must keep thinking. We cannot allow foreigners to engage in all sorts of heinous acts with impunity whilst we keep our poor citizenry at home to die of deprivation. That is absolutely absurd. Past and present governments cannot exonerate themselves from this.

I think that some of the youth too believe in what I called "short cut" and usually drop from schools to engage in this business with the aim of living luxurious lives. It is short cut indeed because a lot have lost their lives too in their quest to make it by battling the "earth and its battalion of soldiers" down there. It is high time the youth got to know that there are better opportunities in school. Let's not allow peer influence to push us to such dead traps in the name of making money. Let's be content with the little given to us to stay in schools.

Even parents elsewhere push their wards into this business because they see education to be a " mecca journey " very long a process to go. Yes I believe you are shaking your head in disbelief but I can state emphatically that there are a number of young ones even at very tender age who engage in illegal mining just to cater for family needs. Isn't that atrocious on the part of some parents?

Going forward, I am very optimistic that the act could be turned into a fortune for nation building because it can employ over 50% of our youth if we commit time and resources to transform and streamline the operation of small scale mining by modifying and integrating these illegal miners. I am not by this piece encouraging anybody to go into illegal mining in its current state since the knowledge of its adversities are not an uncommon knowledge. The climatic changes, deterioration of our virgin lands, extinction of wildlife, drought, polution in different forms and loss of lives are just a few of the many consequences of illegal mining. My call is on all stakeholders and policy makers to consider studying and transforming this misfortune into a fortune considering the many benefits it stands to bring in, to catalyze our national development.

It is the matter of national commitment. It is absolutely impossible to create employment to cater for everybody in the formal and informal sectors but our creativity can place people in a better position to explore many opportunities for national development. Everybody has a role to contribute in developing this country and our policies must be largely integrative and inclusive. We can put politics aside for policy because politics have not been able to curb the issue of illegal mining since independence.

Shall be back.....
Denis Andaban
[email protected].