Seth Terkper, Where Is The Money? 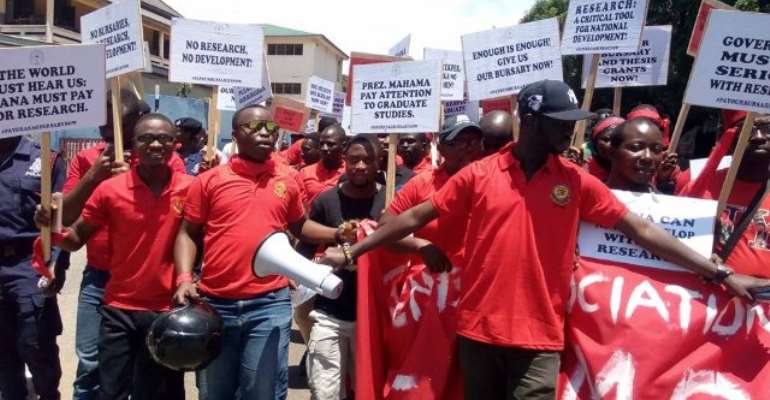 Hundreds of graduate students took to the street on Wednesday to protest against government's failure to release the bursary grants for the 2015/16 academic year.

Wielding placards with various inscriptions such as “Prez Mahama must respect graduate students,” “Invest in Research Mr Mahama,” “Enough is enough,” “Give us our Bursary Now,' the students demanded the immediate payment of their grants.

National President of Graduate Students' Association of Ghana (GRASAG), Rashid Kwesi Etuaful, said government had demonstrated over the years that it does not value graduate education.

He said the association was concerned about the undue delay of the payment of their thesis and bursary grants.

Government is expected to pay GH¢450 to post-graduate students, who are pursuing various degrees in Business Administration (MBA) and Arts (MA) but the payment has often delayed.

According to him, government has on numerous occasions promised to release the funds.

“We need timelines about how they are going to pay us the money,” he said, adding that the students have failed to meet some of their academic deadlines because of the delay in the payment of the money.

This, he said, defeats the everyday mantra of President John Mahama that he was investing heavily in the education sector.

“Government does not value graduate education in the country yet they are quick to compare Ghana to Malaysia and Singapore,” he told Joy News' Raymond Acquah.

He urged government to make the payment forthright or face repeated mass action from the graduates.