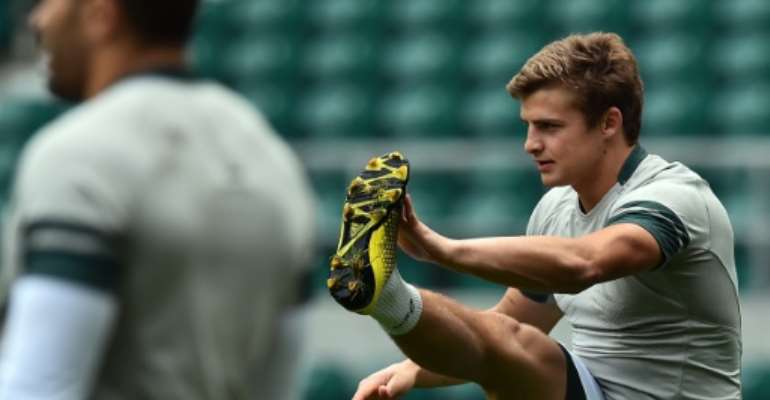 South Africa's fly half Patrick Lambie is back in the team after recovering from concussion. By Gabriel Bouys (AFP/File)

Johannesburg (AFP) - Struggling South Africa have chosen a new half-back combination and recalled Patrick Lambie to full-back for a Rugby Championship Test against Australia in Pretoria on Saturday.

Lambie takes over from Johan Goosen having recovered from serious concussion sustained in a mid-year defeat by Ireland.

The axing of Jantjies and de Klerk was anticipated after the public and media placed much of the blame on them for losses in Argentina, Australia and New Zealand.

The pack that started in the 41-13 thrashing by New Zealand two weeks ago remains unchanged for the round 5 match at Loftus Versfeld Stadium.

Fit-again tighthead prop Julian Redelinghuys had been tipped to replace Vincent Koch, but has been included among the eight replacements instead.

While most Springbok supporters would have wished for more changes, Coetzee justified making only three.

"We want to build continuity," he stressed after naming his team.

"Elton and Faf remain an integral part of our squad and feature in our future plans, but Morne and Rudy deserve an opportunity to start.

"Patrick brings experience, calmness and leadership, which will be invaluable this weekend, and we are very pleased to have him back."