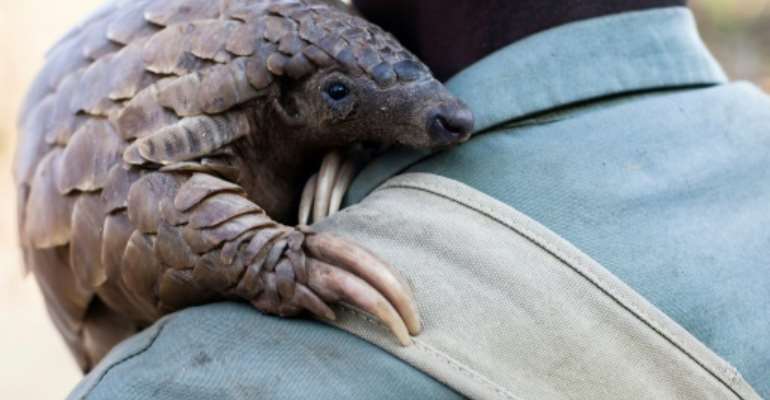 Pangolins are the world's most heavily trafficked mammals. By Jekesai Njikizana (AFP/File)

Johannesburg (AFP) - The shy, scale-covered pangolin is to receive the highest level of protection against illegal trade to try to save it from extinction, after a vote Wednesday by delegates at a global conference.

The reclusive, gentle mammal is prized as an edible delicacy and ingredient in traditional medicine, especially in China and Vietnam as well as across Africa.

Rocketing demand for their meat and body parts has fuelled a boom in illegal hunting with more than a million pangolins believed to have been poached from the wild in the past decade.

The Convention on International Trade in Endangered Species (CITES) meeting in Johannesburg voted overwhelmingly to ban trade in the endangered pangolin, the world's most heavily trafficked mammal.

CITES said in a statement that all eight species of pangolin would be moved into its "appendix 1", which outlaws all international trade in animals facing possible extinction.

"This is a huge win and rare piece of good news for some of the world's most trafficked and endangered animals," Ginette Hemley, of conservation group WWF, said in a statement.

"(It) eliminates any question about legality of trade, making it harder for criminals to traffic them.

"The parties must move swiftly to enforce the decision. Illegal trade will continue to threaten pangolins as long as demand for their meat and scales persists."

Pangolins are the world's most heavily trafficked mammal

Pangolins, which have bad vision but a good sense of smell and hearing, are covered in tough, overlapping scales, and eat ants using pink, sticky tongues almost as long as their bodies.

When threatened or attacked by predators such as lions, they curl into defensive ball, making it easy for them to be picked up by human hunters and put into a sack.

About the size of a small dog, they are solitary, mostly nocturnal and cannot be easily farmed or kept in captivity due to suffering stress.

"We are happy that the world has finally decided to pay attention to the plight of this little known and amazingly unique animal," said Jeff Flocken of the International Fund for Animal Welfare (IFAW).

"They are one of the most imperilled species on the planet and it is about time that we wake up and do something to save them."

In Chinese traditional medicine, pangolin scales are ground into a powder believed to cure conditions from headaches and menstrual cramps to nose bleeds and lack of virility.

Research published in the early 2000s estimated pangolin numbers in China have declined by up to 94 percent, according to the International Union for Conservation of Nature.

The scales are sometimes even used as guitar plectrums.

In traditional African culture, some people believe in keeping a scale in their pockets to ward off evil.

Zimbabweans used to present the mammals to President Robert Mugabe during his early years in office, but the practice has been discontinued.

The CITES treaty, signed by 182 countries and the European Union, protects about 5,600 animal and 30,000 plant species from over-exploitation through commercial trade.

The 12-day conference, which started on Saturday, is sifting through 62 proposals to tighten or loosen trade restrictions on around 500 species.