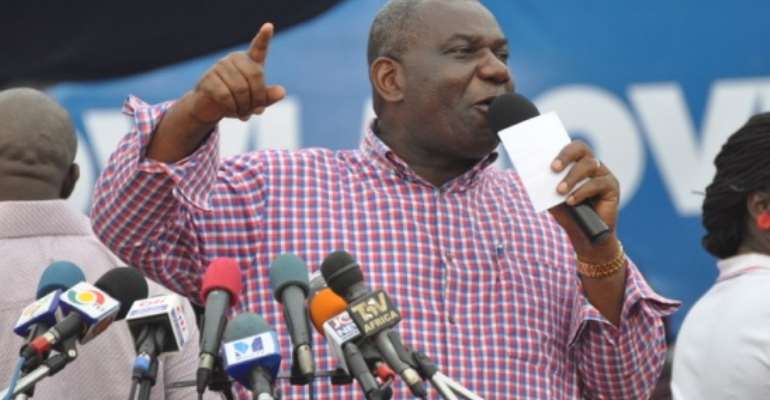 The opposition New Patriotic Party (NPP) has rubbished claims by the National Democratic Congress (NDC) that it has significantly transformed the country's education sector.

According to NPP, “Even though the Mahama administration continues to sing about how much they have transformed the education sector, the NDC as a party has failed to support its claims of achievements with concrete evidence.

The NPP said this in a statement issued by its 2016 Campaign Policy Advisor, Boakye Agyarko.

“The NPP believes that there is much more to be done in transforming the education sector than the lies and mere rhetoric the NDC government continues to feed to Ghanaians.”

It made specific reference to the inability of Okudzeto Ablakwa, Deputy Minister of Education in-charge of Tertiary Education to provide concrete evidence when pressed for more information about the NDC manifesto claim that 100 million exercise books had been distributed by the Mahama government since 2013.”

“Ablakwa promised to furnish the public with more information about this policy's implementation the next morning,” according to the statement.

It said, “This information was supposed to have shown that indeed 100 million exercise books were supplied and that in 2015 alone, 58 million books were given to Ghana's children.”

The NPP noted that “three days on, no information has been released. How difficult is it to present details of a policy that has been actually implemented to Ghanaians? Unless of course, this was a lie in the first place and cannot be substantiated.”

At its press conference held on Monday, September 19 this year, the main opposition party pointed out that textbooks had been abandoned by the Mahama government.

This was in spite of the NDC manifesto claim that “12.5 million English, Mathematics and Science textbooks were distributed to public basic schools between 2013 and 2015.

This, according to government, enabled Ghana to exceed the universal textbook-pupil ratio of three textbooks to one pupil.

Textbooks decrease
But the NPP said contrary to government's claims of exceeding the universal textbook-pupil ratio, the delivery of textbooks to schools in the country is on the decline.

According to the party, “A further enquiry into the Education Sector Performance of 2016 report published by the Ministry of Education showed that the 'Core Textbook to pupil ratio' in public basic schools both at the National and Deprived District levels have been on the decline since 2013/14.”

Comparing the NPP's performance to the NDC in the delivery of textbooks to schools, the party indicated that “textbooks at basic level were delivered to public basic schools in the first term of 2005/06 academic year.”

It added that “approximately 90% were delivered by end of year, and each pupils/student had textbooks for all subjects.”

“The NPP is proud to be the first government since independence to have achieved this feat,” the statement said.

Appeals
The NPP therefore appealed “to Ghanaians to be discerning in distinguishing real achievements in the education sector from phantom achievements of the NDC government couched in flowery language.