Kalaba a potential match-winner for Mazembe 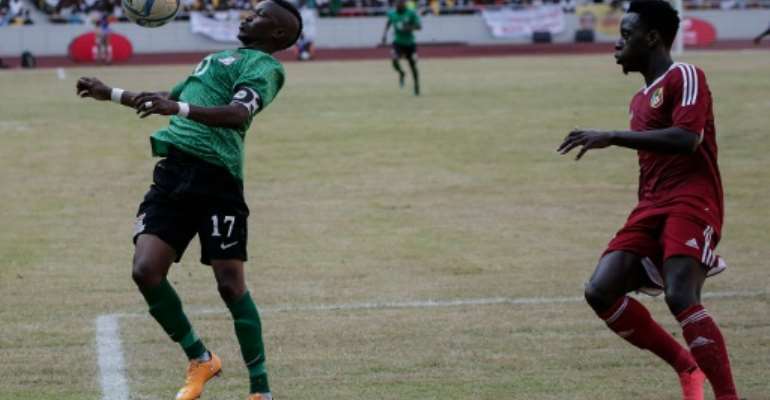 Rainford Kalaba (L) has scored six goals this season in the CAF Confederation Cup and is a potential match-winner when Mazembe confront Etoile Sahel. By Marco Longari (AFP/File)

Johannesburg (AFP) - Rainford Kalaba is a potential match-winner when TP Mazembe of the Democratic Republic of Congo confront Etoile Sahel of Tunisia on Sunday for a CAF Confederation Cup final place.

African giants Mazembe and Etoile, winners of the two major CAF club competitions last year, are level at 1-1 on aggregate going into the second leg of the semi-final.

The 30-year-old Zambia captain and winger has scored six goals this season in the African equivalent of the Europa League with five coming at Stade Mazembe in Congolese mining hub Lubumbashi.

He bagged braces in convincing victories over Medeama of Ghana and Young Africans of Tanzania and the only goal in the other home group game against Mouloudia Bejaia of Algeria.

Those five goals plus one away to Medeama make Kalaba the joint-leading scorer in the Confederation Cup this year with Arseno 'Love' Cabungula from already-eliminated Sagrada Esperanca of Angola.

Both clubs have won nine CAF competitions, a record matched by Zamalek and bettered only by another Egyptian club, 19-title Al Ahly.

France-born Mazembe coach Hubert Velud has warned that home advantage on an artificial pitch in southern DR Congo is no guarantee of success.

"It will be a slightly different game from the first leg and we must be careful because Etoile are a great team," he told reporters in Lubumbashi.

"I am concerned that we created a lot of scoring opportunities in Tunisia and scored only once. We need to be more clinical."

This will be the third match between the clubs this year with hosts Mazembe lifting the CAF Super Cup last February by winning 2-1 thanks to a brace from Ghanaian Daniel Adjei.

Velud has lessened the dependence of predecessor and compatriot Patrice Carteron on non-Congolese Africans, choosing five locals in his first-leg starting line-up.

Among the quintet was 40-year-old pony-tailed goalkeeper Robert Kidiaba, who bounces around the goalmouth on his bottom every time Mazembe score.

Nine other FUS players, including Senegalese Ass Mandaw Sy and Gambian Youssoupha Njie, have got on the scoresheet so there is no shortage of potential match-winners.

Bejaia boast a scrooge-like defence with goalkeeper Chamseddine Rahmani conceding only three goals in four away matches en route to the semi-finals.

Police smoke out Shatta Wale, handcuff him for faking gun at...
32 minutes ago