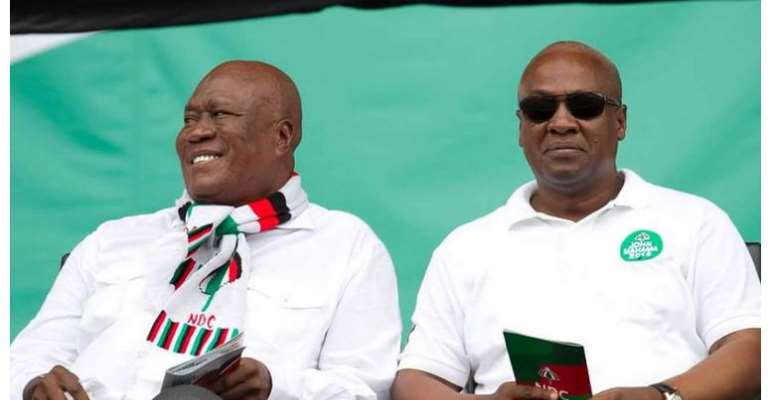 Please do not read the NDC 2016 manifesto.  It is a litany of promises never to be delivered.  Rather, I urge you to go back and find the 2012 document they issued.

Got it?  Now read it in detail and look around. Anything there seem familiar?  Can you reconcile the crass dumping of words at that time to the physical environment you have today?  I am looking for a paragraph, which explains where they said they would develop this country and ready it for take off in the future to come.  Does it say anywhere that that they are building an infrastructure-based economy that would move us forward to a Ghana utopia? Because that is the new song on the campaign trail.

Next year we turn 60.  If you believe in karma, note this coincidence.  After ruling the country for many decades the NDC and its previous versions lost the elections in 2000 and handed over to the NPP just as Ghana celebrated its golden jubilee in 2007.  Can't tell you why, but is it just a coincidence that the NDC party maybe will not get an opportunity to reward themselves on another decade of mismanagement?

It has become a very difficult sell for the Government, trying to justify what they have achieved in infrastructure as claim to a place in history as the best government this country has ever had.  Now there are “better comparisons” over Kwame Nkrumah's CPP despite all the previous noise and praise touting their origins from that party.

But you have had a chance to flick through the glossy “Accounting to the people” magazine.  All the lovely pictures comingled with the artist sketches of yet to be completed building, unoccupied ones and future ones yet to be “sod-cut”. But all the same displayed as the achievements of Government.

I was on air with a Presidential Staffer (I don't know what that position entails) on Citifm's the Big Issue on Saturday – Mr. Seth Ofori – and I was at pains to understand how all these great infrastructure projects and road development promises have translated into a Better Ghana and made the people better off in life.  Then I heard for the first time that they were preparing the ground for a major escalation in wealth creation just as had been done in Singapore and South Korea.  I didn't realise we were simulating anything from Singapore?

But in 2012 the NDC titled its manifesto “Advancing The Better Ghana Agenda” with a footnote; Jobs, Stability, Development.

Now, I am lifting these notes straight from the NDC 2012 manifesto focusing on the sectors they claim showcase their most achievements.

Railways
Refurbishment and modernization of the Western Line; • Rehabilitation of the Accra-Tema, Kumasi Ejisu, Accra-Nsawam and Takoradi-Kojokrom rail networks; Aviation

INFRASTRUCTURE
The next NDC Government will implement the following programmes: •Increase power generation from 2,443 megawatts to 5,000 megawatts by 2016; • Launch an 'Energy For All' programme under which universal access to electricity will be targeted by 2016; •Increase social housing and improve sanitation and social facilities that promote secured settlements for the people's improved welfare; • Continue the Western and Eastern Corridor Roads and modernise the Central Spine; • Construct a new deep sea port in the Western Region; • Use oil and gas development as a catalyst to diversify the economy; • Target the development of the country's potential in mini hydro power projects with capacities below 100 megawatts, especially in the northern savannah zone, in partnership with SADA; • Construct two National Science Parks to spread the benefits of technology across Ghana.

JOB CREATION INITIATIVES
Activities in the under-mentioned areas will create thousands of jobs. Manufacturing/Industry: With the anticipated commercial exploitation of crude oil and gas, we are laying the foundation for: • An integrated petroleum industry based on bauxite; • A petro-chemical industry based on salt and natural gas; • A fertilizer industry to give impetus to agro-development; • A salt-based chemical industry for caustic soda; • Allied consumer products and exports based on oil and gas; and • An integrated iron and steel industry based on the iron ore deposits at Oppon Manso in the Western Region. Cheap gas-fired energy will facilitate the full revival of the following industries: • Volta Aluminium Company; • Textile industries and ventures in their value chain; • Ceramics, brick and tile manufacturing; • Glass factories; and • Steel mills.

I will not pass judgment on what has been achieved.  The problem we have in this country is the persistent denial of facts by Government.  Nothing interpreted by anyone else other than Government is true and accurate.  All of us are guilty of wanting to distort the BDC agenda in favour of the NPP, because we all want to replace the NDC with the NPP.  And since that is the general song we play, why doesn't the NDC step away and allow the people of this country to have their will?

We are all (those who don't sing the praises of JDM) blind to success.  But if all this expected to be achieved has been done, then why are we complaining?  All we want is a lot of peace and quiet so we can thrive to our best capabilities and manage our lives more successfully.

Read the paragraphs above and make your own decisions.  We either carry on like this or we move into another era and flex our quadrennial authority.

President John Mahama on the podium launch of the NDC 2016 manifesto spent a considerable time touting the biggest blessing in his life; Lordina the mother of his children.  Even as he produced another litany of items knowingly never to be achieved, he sang praises of the woman to whom he had pledged faithfulness and forever love, just the same as he had sworn an oath to serve God and Country and echoed the words in the National Anthem; “…. make us cherish fearless honesty and make us to resist oppressors rule with all our will and might for evermore”.

And that brings things round that I have only ever seen one portrait of the first family and that showed six children.  There are rumours all over the place that there are seventeen or nineteen children, seven in wedlock and the rest claimed out of wedlock. He declared nine at some time, but this report by the Daily Guide as far back as 2008 when JDM was still making his way to the top says different.  Lordina did not want him to be in politic s, she had no problem with him not keeping his religious vows but now together they bask in political sycophancy.

Surely there has to be an honour-code in his life somewhere; because there certainly is none that I can see in his code with Ghanaians.  This week I settled on a tickling phrase by US First Lady Michelle Obama.  She recounted her eight-year stay in the White House with Barrack and said “you know the Presidency does not change you, it reveals you”.  I like.