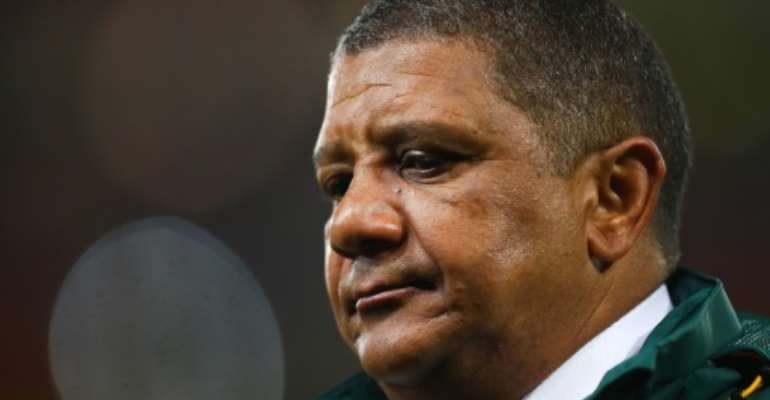 "We know that our discipline was not on par against the Wallabies in Brisbane, and we have to show a big improvement on several fronts," said South African coach Allister Coetzee. By Patrick Hamilton (AFP/File)

Christchurch (New Zealand) (AFP) - South Africa coach Allister Coetzee has warned his side discipline is key as he made two changes to his starting line up for their must-win Rugby Championship clash with New Zealand in Christchurch on Saturday.

Lock Pieter-Steph du Toit and prop Vincent Koch have been promoted to the run on side with a further three changes on the bench.

South Africa, with only one win so far from three games and beaten 23-17 by Australia last week, need to beat the runaway competition leaders New Zealand if they are to stay alive in the championship.

"We know that our discipline was not on par against the Wallabies in Brisbane, and we have to show a big improvement on several fronts," Coetzee said when naming his side on Thursday.

"Our defence will have to be solid for the full duration of the match, because the All Blacks have the game breakers that will punish you for any defensive lapse."

Du Toit replaces Lood de Jager, who sustained a severely bruised knee in last week's loss to Australia in Brisbane, while Koch has been chosen ahead of Lourens Adriaanse.

Among the replacements, uncapped hooker Malcolm Marx is set to make his debut off the bench, Willem Alberts fills the gap left by Du Toit and centre Damian de Allende comes in for Lionel Mapoe.

"I have decided on a six-two split on the bench again as I believe Willem and Jaco (Kriel) will each make a big impact when they enter the field of play," Coetzee said.

"I decided to swap Damian with Lionel to ensure we have cover for the inside centre position."

Coetzee said the decision to blood Marx after Bongi Mbonambi had been the preferred back-up hooker is part of his long-term planning.

"Malcolm has huge potential and we have a plan for him and Bongi Mbonambi because of Adriaan (Strauss) retirement at the end of the season. Malcolm now gets a chance on the reserve bench."

Francois Louw, who made his Test debut against Wales in 2010, will play his milestone 50th international for the Springboks, while Bryan Habana makes his 120th appearance, setting a new world Test record for a wing.

The last time South Africa won in New Zealand was seven years ago when they beat the All Blacks 32-29 in Hamilton.

New Zealand have been unbeaten in 43 Test matches at home against all opposition since then.