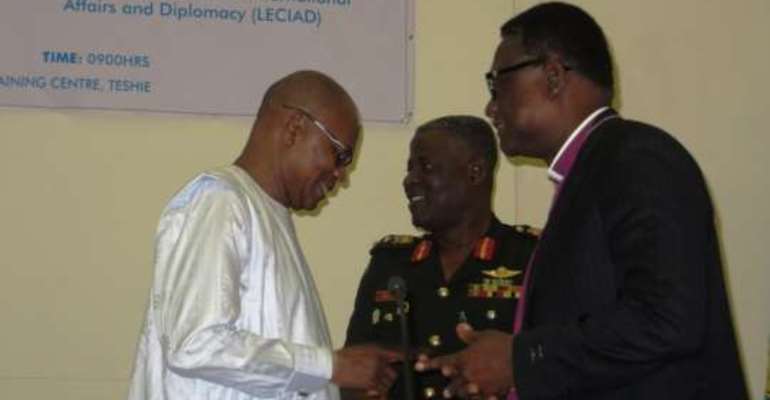 By Iddi Yire, GNA
Accra, Sept. 9, GNA - The Electoral Commission (EC) must ensure transparency in all the phases of Ghana's electoral process in order to build public confidence.

Dr Mohammed Ibn Chambas, the Special Representative of the United Nations Secretary-General for West Africa, and the Sahel, who gave the advice, tasked the EC to, consequently, safeguard against fraud and ensure that its decisions were published in a timely manner.

He said during polling and counting, detailed results needed to be swiftly displayed at each level of the process, broken down to lowest level (usually polling station level but sometimes counting centre level) to enable an independent audit to be conducted and results to be traced from the lowest to the highest levels.

"At each stage of the process, best practices and safeguards exist to enhance transparency and reduce the possibility of fraud, including for voter identification, secrecy of the ballot, numbering of ballot papers and the secure handling of polling materials," Dr Chambas stated at a public lecture on Peaceful Elections in Ghana.

The lecture on the theme: 'Reducing the Incidence of Violence in Election 2016 and Beyond', was organised by the Kofi Annan International Peacekeeping Training Centre (KAIPTC), in collaboration with STAR-Ghana and the Multimedia Group.

He said despite the best precautions, disputes would always occur but as a means to build and maintain trust among stakeholders, an efficient, timely and transparent complaints and appeals process towards enjoying public confidence was an important aspect of a credible election process.

He said: "Where this is not the case, contestants can be reluctant to seek redress through formal procedures thereby increasing the chances of violence".

He, however, appealed to all contestants in the December 7 general election to use constitutional and legal means to address their grievances.

Dr Chambas said electoral violence would manifest itself in many forms such as defamation, kidnapping and scuffles; which were meant to impact on the electoral process and ultimately influence results.

"It is essential that each and every concerned individual assumes his or her role to prevent such an occurrence from happening in Ghana," he said.

"In order to accomplish this, political parties must know that they have a primary role in educating their supporters to promote a culture of peace, dialogue, and consensus," he added.

He said the Electoral Commission, the Judiciary and other Republican institutions such as the Police and other security agencies, must be strengthened in the accomplishment of their mission and in the neutrality of t their task.

He also called on civil society organisations, religious leaders and chiefs to assume their important role in this national endeavour.

Dr Ibn Chambas said in reducing the risk of violence in the 2016 Elections should include fine-tuning the electoral process; particularly through building public trust and confidence especially towards the election management body, the judiciary and the security agencies.

"The UN and the wider international community are impressed by your collective commitment and remains convinced of the strength of Ghana's democratic tradition, and stands ready to contribute its share so that this election again represents the true aspiration of the people of Ghana," Dr Chambas said.

Former President John Agyekum Kufuor in a statement read on his behalf, urged the EC to work with political parties to boost their confidence and trust in the outcome of the general election.

He said the media had a huge responsibility of ensuring smooth voting in the election.

The Reverend Professor Emmanuel Asante, the Chairman of the National Peace Council, challenged Ghanaians to shun politicians who used abusive language on their campaign platforms.

Air Vice Marshal Griffiths Evans, the Commandant of the KAIPTC, said despite Ghana's huge democratic credentials since 1992, there was the need to preserve and consolidate the gains.